In the test, we look more closely at the MSI GS43VR notebook with Intel Core i7-7700HQ and Nvidia GeForce GTX 1060. With its 14 inch display, the gaming laptop is a compact companion for playing on the go. 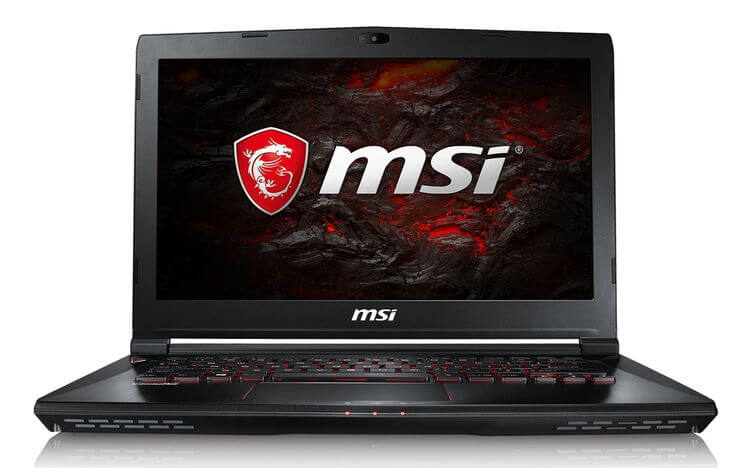 In addition, MSI brings in the so-called Phantom Pro well-known hardware in the game. It has a Steelseries keyboard, the Killer DoubleShot Pro network card, and Nahimic software. The MSI GS43VR 7RE-062 model costs almost 1800 euros. If you want to buy, you can check out our review.
At the latest since the introduction of the new Nvidia GeForce GTX 10 graphics cards, the words High-End Gaming and Laptop can be used again in the same breath.
Just a few months ago, high-performance notebooks for gamers were either stationary at the desk or compared to the home desktop PC the high investment barely worth. A compact, lightweight design is now no longer a high performance. A good example of this is the new MSI GS43VR 7RE-062.

The 14″ notebook made of aluminum and plastic weighs just 1.6 kg on the scales and shows an overall height of fewer than 23 millimeters. The processing and haptic can be seen. In the test of the MSI laptop, we could hardly cause any distortion even with rough handling.
The design of the Phantom Pro is also based on understatement, which is why the MSI GS43VR can be presented visually well in the gamer environment as well as in the serious conference room.
MSI and Steel Series with good cooperation
Important factors for players are the built-in input devices. MSI also relies on the long-lasting cooperation with SteelSeries in this notebook.
The red illuminated keyboard is shown with a medium stroke and a soft pressure point. The size and spacing of the individual keys can convince as well as the comparatively quiet triggering of these keys. However, we would have expected a multi-color lighting at a price point of 1.800 euros.
In addition, we were in the test with the one-line enter button. Too often we solved the overlying rhombic symbol. Everything a question of habit could be said.
As gamers, however, it is often possible to switch between the notebook and the desktop or the internal and external keyboard. Constantly re-adjusting to the input devices could have a lasting effect on the daily life of the game. With the touchpad of the MSI GS43VR 7RE-062, however, we are completely satisfied. 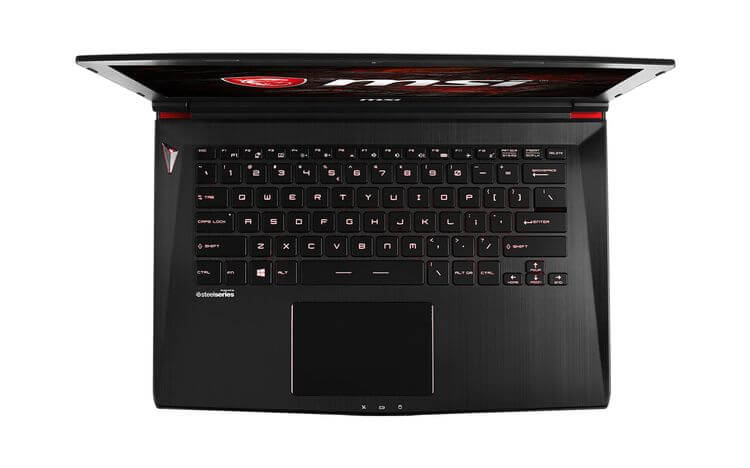 In terms of connections, the 14 inch MSI notebook is solidly set up. Spread over the left and right side of the laptop, we meet two USB 3.0 ports, a future-proof USB-C 3.1 with Thunderbolt 3 support, HDMI, SD card reader and audio interfaces.
On the rear side edge is also a mini-DisplayPort, which was placed well above all for stationary operation. It supports external 4K UHD screens up to 60 Hz.
The network modules of the Killer brand enable the MSI GS43VR to connect via Gigabit Ethernet (LAN) or WLAN-ac an Internet connection. For wireless accessories, you can also use Bluetooth 4.1 as a wireless connection.

In addition to the preinstalled Microsoft Windows 10 operating system, you will be able to meet various MSI programs offered to personalize the notebook. The so-called MSI Dragon Center is the first stop.
Here you will find tools for system monitoring, tuning features and support. The built-in app portal also shows you the collected software for configuring the SteelSeries Engine 3 keyboard, the Nahimic sound, the True Color Display settings, or the GeForce Experience graphics card.
Nice accessory: The manufacturer places an annual license of the XSplit Gamecaster free of charge for the purchase of the MSI GS43VR 7RE-062 Gaming Laptops.

The classic: Intel and Nvidia bring the performance thrust

Under the hood of the MSI notebook is the new Intel Core i7-7700HQ processor. The four-core chip (quad core) operates at a clock rate of up to 3.8 GHz and belongs to the Kaby Lake generation. In addition, it has 16 GB of DDR4 memory and the combination of a 256 GB NVE SSD in the compact M.2 format and an additional 1 TB hard disk with 7,200 rpm. 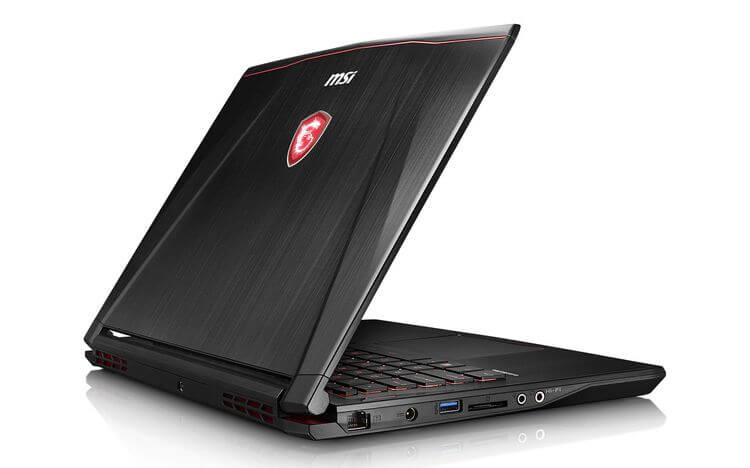 The solid state drive reaches read and write rates of up to 1.5 GB/s in test and thus accelerates the system significantly. The gaming heart of the MSI GS43VR is the dedicated Nvidia GeForce GTX 1060 graphics card, which is installed with 6GB of GDDR5 video memory and, compared to the previous generation of Nvidia, even over the once very expensive GeForce GTX 980M.
The performance in games is therefore guaranteed even with such a compact 14 inch MSI notebook. Current titles such as Resident Evil 7, Dishonored 2, Titanfall 2 or Battlefield 1 can be played smoothly with native FullHD resolution and maximum details.
The performance is also so sophisticated that our test device even managed some games in the 4K UHD format. If we are already talking about challenging games and their smooth playback, it is also the case that classic and eSports popular titles run optimally on the MSI GS43VR 7RE-062.
These include FIFA 17, Overwatch, Dota 2, and League of Legends, Heroes of the Storm, World of Warcraft and CS: GO. Gaming fans will be completely satisfied with the performance of the new model. You can also find selected benchmarks in the lower part of this review.

If we compared to the predecessor of the MSI GS43VR 7RE-062, which has already been delivered with GTX 1060 graphics but still with Intel Skylake processor. It has changed little in the area of the display and the emissions. Although the 14-inch notebook has an anti-reflective display surface, the brightness of 260 to 310 cd / m² makes our previous jubilation fades. An illumination of more than 400 cd / m² would have been better for the MSI GS43VR in the outdoor operation and would be almost already prerequisite at the price. Also, the measured contrast holds with 543: 1 rather in the middle of the rankings.
At the same time, the case shows comparatively high temperatures during gaming, while the fans are close to the 50 dB (A) threshold. The integrated Cooler Boost 3 technology with CPU and GPU separate ventilation system does not seem to help.
After all, the MSI GS43VR remains cool and quiet in office mode (browser, pictures, movies). The recharge time of our test model is a maximum of 7 hours, which during gameplay is reduced to 1.5 hours. On average you can count on perseverance between 4-5 hours. The automatic change between integrated processor graphics and dedicated GPU via Nvidia Optimus is already included in this value.

If you are looking for a compact and yet powerful gaming notebook, the new MSI GS43VR 7RE-062 should definitely look more closely. The lightweight 14-inch is convincing with a strong system and graphics performance, which is ensured by the current Intel Core i7-7700HQ processor and the Nvidia GeForce GTX 1060 graphics card. In addition, the game laptop provides a brisk SSD and a contemporary portfolio of connections and wireless connections. Everything packed in a stylish metal housing with good input devices.
However, the performance crown weighs heavily. The partial noisy fans have to do well to keep the heat in check. High temperatures are still part of the gaming routine in the MSI GS43VR. Likewise, we would have expected more in the area of display brightness, contrast and keyboard layout for our money. The one-line enter key may bring the touch of internationality.
But for whom is the MSI GS43VR 7RE-062 now suitable? If we had to limit ourselves to a type of user, it would be Gustav Gamer. He plays mainly at home at the desk, but often changes the place of use. On the way, it seldom rides and seldom shakes. High temperatures or loud fans do not bother him because he often connects an additional keyboard and mouse and carries a headset while playing. Bottom line, he is looking for a mobile desktop replacement, which he can easily transport from A to B without a big load.
Is that true for you? Then you can strike the MSI GS43VR without hesitation. If not, then you should seek further. Perhaps even a floor higher in the larger 15.6-inch notebooks, which might be better in terms of emissions.
Review MSI GS43VR Gaming Laptop its Compact 14 inch notebook was last modified: March 7th, 2017 by Boby Sanburn