Mar 14, 2017
In the test, the new Dell XPS 13 9365 Convertible Notebook must prove itself as a flexible 2-in-1 counterpart of the popular 13 inch Ultrabook bestseller. Equipped with an Intel Core i7 processor and the well-known InfinityEdge touch display, the premium laptop attracts attention. 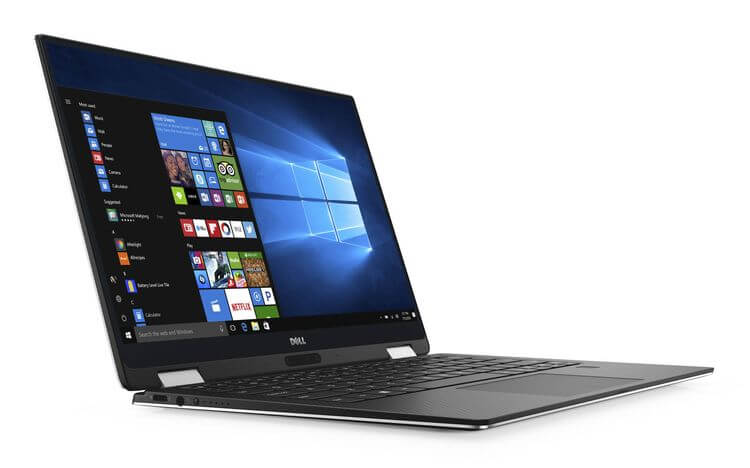 But at a price point of 1.599 Euro, we expect a high degree of perfection. Whether our requirements can be met and whether the purchase is worthwhile, you will find in our test report.

Compact, slim and easy it must be

The American manufacturer is linked to the success of the XPS 13 and goes the way into the hard-fought 2-in-1 market. Competitors like Acer, ASUS, Lenovo, and HP have been stretching their sensors here for years. In the price-intensive premium segment of the convertibles is now the so-called Dell XPS 13 9365.
The basis is the well-known design of the Dell Ultrabooks, which has now been extended by a distinctive 360-degree hinge. Thanks to aluminum, carbon fiber, and rubberized SoftTouch surfaces, we meet a high-quality and above all stable housing, which can convince with regard to look and feel.
The combination of silver and black coloration is in the editorial department’s favor and also the transformation from the classic notebook format into the tablet mode works flawlessly.
Above all, the narrow frame of the 13.3-inch InfinityEdge touch screen attracts attention. But the almost frameless design of the Dell XPS 13 2-in-1 laptop also shows its shadow side. 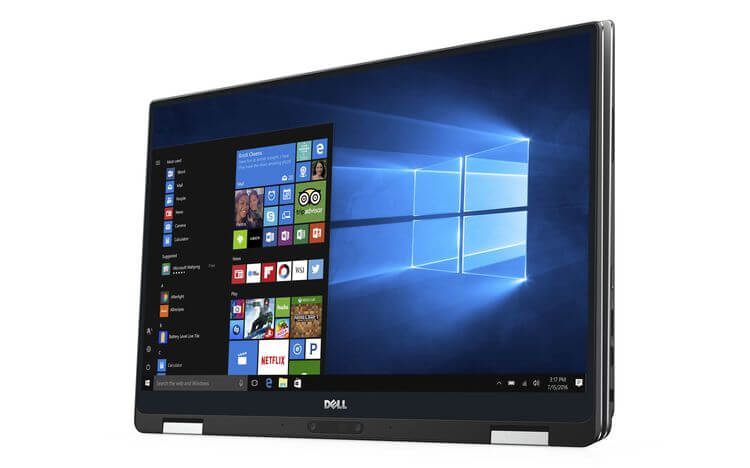 When holding the Ultrabook as a tablet, the test was often carried out unwanted touch inputs, due to the minimal display support surface for our handhelds. In normal notebook operation, on the other hand, the almost 1.600 Euro configuration with a well illuminated Chiclet keyboard for multipliers and a well-dimensioned and precise multi-touch trackpad.
The connections of the 1.24 kg lightweight convertible and between 8 and 13.7 millimeters are presented on the left and right side edges. Back and a front is left free of interfaces. A total of two USB-C ports are available, one with Thunderbolt 3 support.
Not only docks or hard disks are connected via these connectors, but also external screens and the supplied power supply for recharging the battery. A normal size USB interface (Type-A) is not available, but a suitable adapter is included with the Dell XPS 13 2-in-1. Furthermore, a 3.5-millimeter jack port as well as a MicroSD card reader is on board. 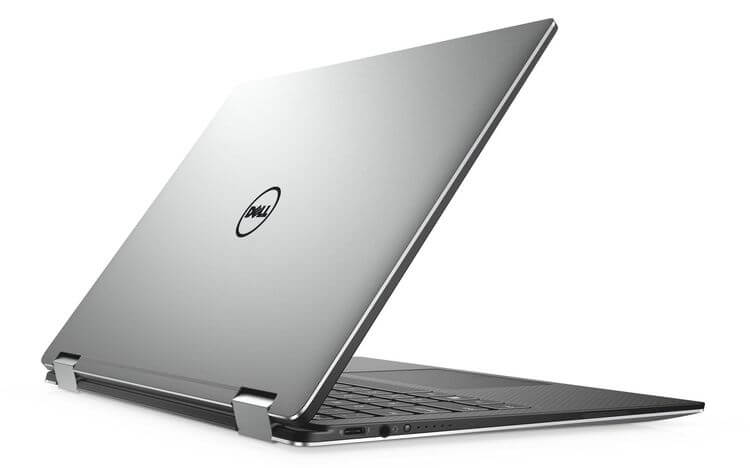 For additional security, a fingerprint scanner is provided on the palm rest and radio connections can be established via WLAN ac and Bluetooth via an Intel 8265 module.

The trend for 2-in-1 convertibles continues to grow in the direction of a fanless construction. This is also the case with the new Dell XPS 13 9365. A completely silent environment is created by the integration of the Intel Core i7-7Y75 processor. 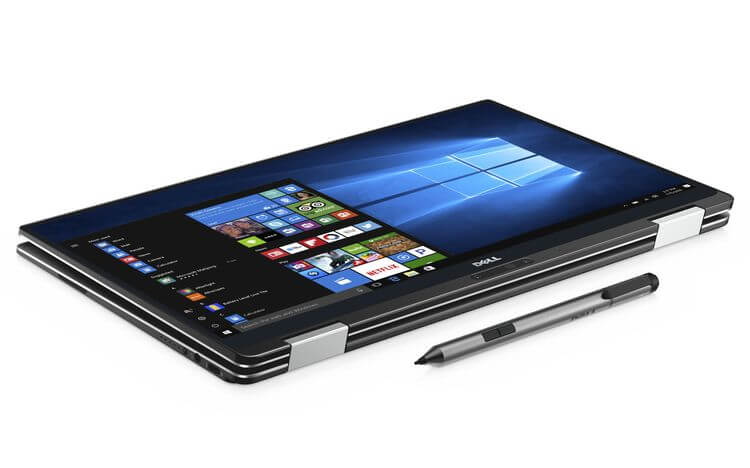 Based on the current Intel Kaby Lake architecture, the dual-core chip (Dual Core) operates at up to 3.6 GHz and shows its speed especially in the operation of applications with only one data core. Here he can even compete with his faster CPU siblings, for example, the Intel Core i5-7200U. In conjunction with 8GB of DDR3 memory and a fast 256GB SSD (approximately 1.2GB / s in sequential reading), the 2-in-1 laptop is best suited for surfing the Internet, dealing with office programs, Consuming multimedia everyday life.
The 13-inch Dell notebook, as well as professional 3D renderings or games, are no longer just as complex productive work as in the case of photo and video editing.
In the display, our Dell XPS 13 2-in-1 laptop tester sets a classic full-HD resolution of 1,920 x 1,080 pixels. Alternatively, the new Dell Convertible Notebook is also offered with a QHD + resolution.
As mentioned at the beginning, the narrow frame of the InfinityEdge touchscreen protected by Corning Gorilla Glass shows its advantages in notebook mode and its disadvantages when used as a tablet. The average brightness of about 300 cd / m² also leaves something to be desired.
At an attracted price of over 1,500 euros, we would have expected here at least 400 cd / m², mainly due to the strong orientation towards mobility and outdoor use. The contrast, on the other hand, is more than 1600: 1 as good as the viewing angle stability of the IPS panel.
By dispensing with active cooling (no fans), the Dell XPS 13 9365 2-in-1 always behaves silently. An average temperature development on the hand-held heat level is shown on average. Only with a very strong utilization of the installed components does it reach very high, punctual temperatures of more than 40 degrees Celsius in the upper area of the keyboard.
In normal office and multimedia operation, however, the peak values rarely exceed 35 degrees. We close our test of the recharge time with a practical value of 9-10 hours away from the socket. In the battery-charging idle we reach a maximum of 16.5 hours, under full load a little over 3 hours. A classic office is working day of 8 hours, the Dell XPS 13 2-in-1 thus easily with a charge.

The new Dell XPS 13 2-in-1 did not fully meet our high demands for a premium notebook, which cost just under 1,600 Euros. We are also impressed with the design, the processing, and the haptics, as well as the battery life and the input devices with touchscreen. 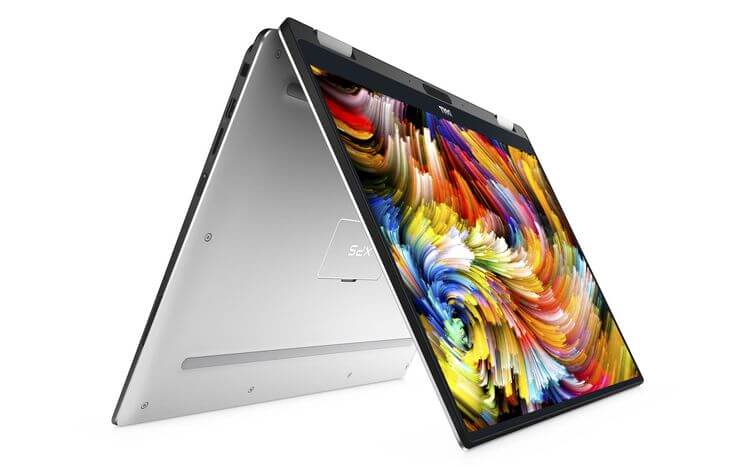 The slim display frame is one of the largest hanger signs of the XPS 13, which can quickly turn out to be a disadvantage when handling as a tablet. In addition, we have to dispense with power, higher display illumination and normal-sized USB connections compared to the conventional manufacturer’s ultrabook. All this is in favor of the flexible 360-degree hinge and a fanless construction.
If you need to choose between the XPS 13 Ultrabook and its 2-in-1 counterpart, we recommend the grip on the classic notebook. If you are looking for a fanless convertible, you can either go to our tested Dell model or save a few hundred Euros by choosing a similar 2-in-1 from Acer, Lenovo or ASUS.