Mar 26, 2017
Dell Inspiron 7567 is just a godsend for a gamer, in any case, the manufacturer claims. However, it is easy to agree with him: the device is equipped with a processor generation Kaby Lake, powerful graphics NVIDIA GeForce GTX 1050 Ti, and also has 1 TB of free space for information storage. 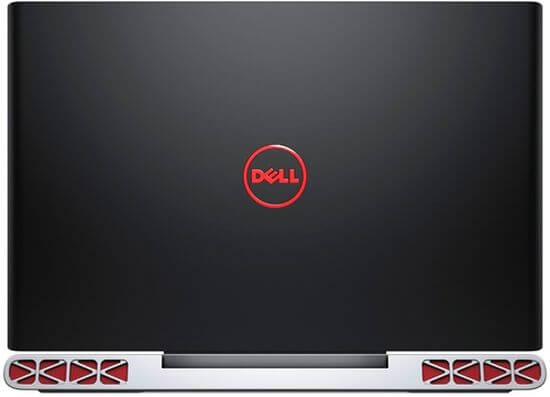 However, this is not all: in addition to the productive filling, the laptop can boast of a capacious battery and a bright appearance. The picture is complemented by the cost of the novelty, which pleasantly surprised us, because it is, on average, $ 1100.

The device is available in two color variations – red and black. The first, no doubt, is designed for eccentric natures, who like to stand out from the crowd. However, the variant with black color should not be underestimated, because Red elements are also available, for example, a logo in the middle of the lid. The case of Dell Inspiron 7567 is made of plastic, its outer surface has a soft-touch coating, which is nice to touch. By the way, it is better not to abuse touches, because the cover is matte, which means that it actively collects fingerprints, dust, and dirt.

The rear end is noticeably sloping, each of the corners is upper, that the lower part of the structure is very sharp, even too much. And if the back edge is sustained in the best traditions of the gaming niche, then on the lid design the manufacturer “rested” – only the company logo was applied to it. The screen is attached to the working area by means of one hinge element, to the extent of a tight one. On the top frame of the display flashes the lens of the web camera, on the bottom – the logo of the brand. The front end of the case is decorated with a pattern resembling an ornament, it looks very unusual.
To get to the hardware components of the laptop, you just need to unscrew one screw. Next, remove the plastic panel, and you’ll see the memory slots, battery, fan, Wi-Fi-module. Dimensions device 385h275h25 mm, its weight is 2.6 kg, which makes the laptop quite mobile and easily transportable. Of course, not a feather, but for the 15-inch form factor of the gaming segment, such indicators are a very good result! 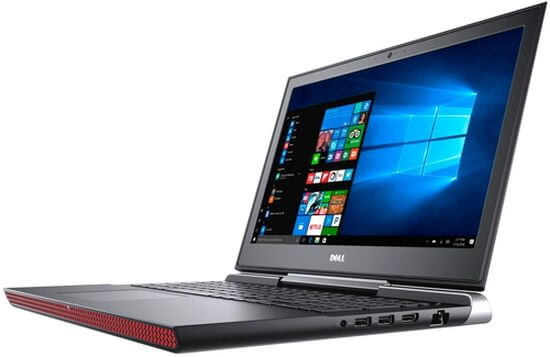 The screen of the device is not something that was not impressive, but even a little disappointed. The 15.6-inch display has Full HD resolution with a pixel density of 141 ppi. The maximum brightness is 270 cd / m2, the contrast ratio is 447: 1. We go further: compliance with the color spaces sRGB and AdobeRGB is low – 55 and 35%, therefore, the quality processing of images is not even a question. The screen is not touched.
In this case, the TN matrix is used, so the viewing angles are very limited, the saturation and brightness of the image vary depending on the angle. The surface of the display is anti-glare, for working near a window or on the street this is undoubtedly a plus. However, in practice, another situation: due to a small margin of brightness, images or web pages are almost invisible, especially in sunny weather. 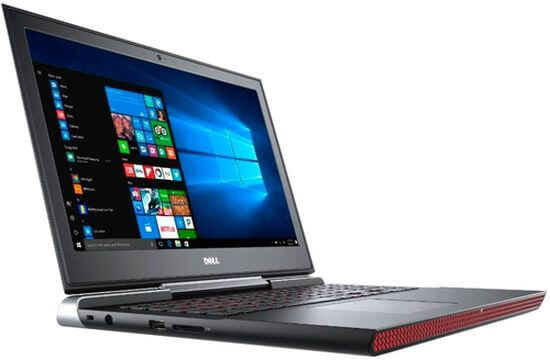 Acoustics did not rehabilitate the quality of the screen in our eyes – its capabilities are also far from ideal. Even at maximum, the sound is not very loud, there is a distinct lack of bass, but what’s good is the absence of wheezing and distortion. In general, if you want to protect yourself from the world with music, it’s better to use headphones, they will partially fix the situation.
The webcam has a resolution of 1 megapixel. It is designed for video communication and with this task is doing well.

The full-size keyboard Dell Inspiron 7567 is made on an island principle, so each key is separated by a small island of free space. The keypad does not bend during typing, in addition, it is recessed into the surface, so it does not touch the screen when the notebook is closed. The buttons are smooth to the touch, they have a shallow stroke and good feedback. As is usually the case with the 15-inch form factor, there was a digital unit. In addition, the keyboard has two levels of red illumination, the brightness of which is enough to be visible by day, and gently illuminate the keys at night. 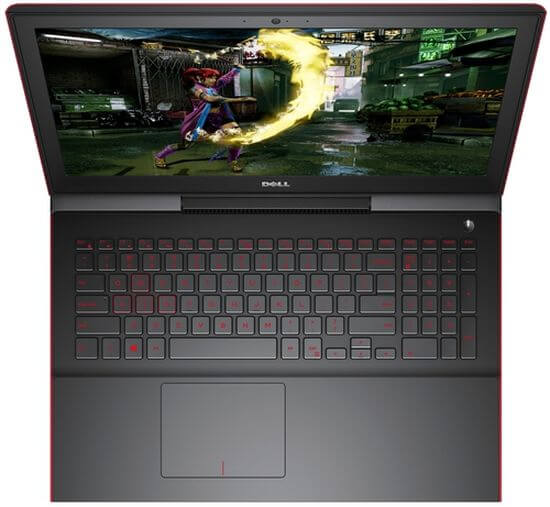 As for the frequently used keys, the [Enter] button, in this case, is single-row, under it is extended [Shift], even lower – arrows located slightly away from the main block. On the left side, the buttons also have dimensions that are optimal for games and work. By the way, the keys [W], [A], [S], [D] are additionally highlighted with a red border to make it easier to get on them. To turn on the laptop, you can easily click on the round button located above the keyboard in the right corner.
The touchpad is characterized by large dimensions and a slightly rough surface. It works quickly, without the slightest delay. The manipulator supports multitouch gestures, for example, scaling, scrolling. It does not have physical keys, but there are built-in zones with a red separator conditionally separated.

The Dell Inspiron 7567-9316 runs on the familiar Windows 10 Home 64-bit. The filling of the laptop is represented by a quad-core Intel Core i7-7700HQ processor from Kaby Lake. It comes in a 14-nm process technology and runs at 2.8-3.8 MHz. The chip has a 6 MB cache in the 3rd level and is energy-intensive because its heat package is 45 watts.

Built-in graphics Intel HD Graphics 630 has 24 executive blocks and supports DirectX 12. It is suitable for everyday work, like web surfing or working in programs like Word, Excel, etc. Games can also be tried, but only old and at low settings. But is someone buying a gaming laptop in order to play simple toys? Of course not, especially since the Dell Inspiron 7567 has a powerful discrete graphics NVIDIA GeForce GTX 1050 Ti! This video accelerator works at frequencies of 1493-1620 MHz, has 4 GB of its own DDR5 memory. It supports DirecX 12.1 and OpenGL 4.5, and its TDP is 70 watts.
The amount of RAM is 8 GB standard DDR4-2400 MHz with a maximum of 32 GB. To store the information the manufacturer provides an HDD for 1 TB (5400 rpm) and a hybrid SSHD drive with a capacity of 8 GB for the cache.

GPU drivers allow you to run modern games at high or maximum settings. For example, Resident Evil 7 (2017) on ultra will show 26 frames per second, Watch Dogs 2 (2016) – 31 fps, and Call of Duty Infinite Warfare (2016) – and at all 59 fps! Fans of Doom (2016) will be pleased with 68 frames per second at maximum settings, and fans of Rising of the Tomb Raider will enjoy the game process at 38 fps. Of course, all games were tested at the native resolution of the laptop – Full HD.

On the right side of the laptop, you can see two USB 3.0 ports (one of which has PowerShare support), HDMI video output, RJ-45 network connector, and a combined audio jack. 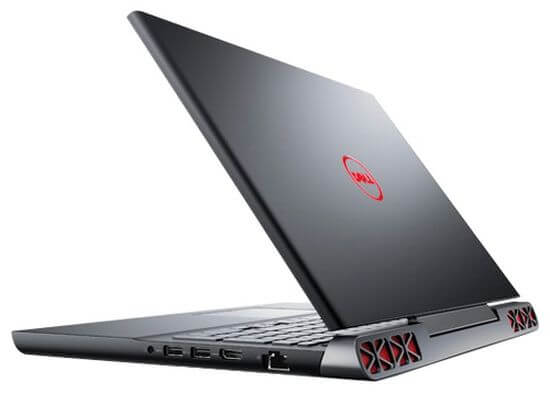 The left side is equipped with another USB 3.0, a 3-in-1 card reader (SD / SDHC / SDXC), a Kensington lock slot and a power connector. There is nothing behind, as well as from the front.
Wireless communications are represented Wi-Fi 802.11 ac and Bluetooth 4.2.

The Dell Inspiron 7567 has a 6-cell lithium-ion battery with a capacity of 74 Wh. At minimum brightness in reading mode, the device will work for about 19 hours. In the web surfing mode with an average level of brightness, the laptop sits in about 10 hours, while watching the video – for 7 hours. As for the maximum load, it will discharge the laptop in an hour and a half. In our opinion, the autonomy indicators, in this case, are very high, we remove hats from the manufacturer.
During the game process, the laptop makes noise, but not enough to annoy or dislike the user. And if you do not load the device, then no fan sounds are heard at all.

Dell Inspiron 7567 is not as simple as it might seem at first glance. It looks stylish, there is a choice between the color variations – bold red and classic black. At the same time, plastic is used for finishing the case, there is not even a hint of metal. At the same time, we definitely liked the ergonomic keyboard, with its backlight and soft key strokes. The filling is beyond any praise: the Intel Core i7-7700HQ processor and the NVIDIA GeForce GTX 1050 Ti video accelerator excel at the latest games, even at the maximum settings!
Now go to the minuses! Subjectively, the biggest drawback of this device is its display. It is characterized by low brightness, weak contrast, and TN matrix. Also, we would like to see a more extended set of interfaces, for example, at least one USB Type-C port. The cost of the device in the described bundle is about $ 1100, that is, in fact, we are dealing with a budget gaming laptop. And for such an amount, you can forgive some shortcomings, right?