Mar 6, 2017
The Acer Spin 7 SP714-51-M6LT notebook is a flexible convertible laptop with a fast Intel Core i7 processor and Windows 10. The other highlights include the 14-inch FullHD display and a 256 GB SSD. 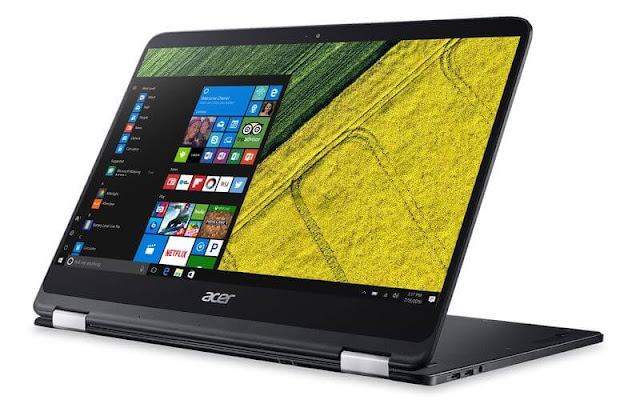 In addition, the convertible model is light, slim and built into a valuable metal housing. The Acer Spin 7 comes without a fan. We find out if buying the compact 2-in-1 is worthwhile.
New premium notebook hybrid: The Acer Spin 7 turns with a few hands from a laptop into a tablet.
A combination of notebook and tablet, so-called 2-in-1s, are currently on the list at manufacturers such as Acer, HP, Dell and ASUS.
Above all, the introduction of the Microsoft Windows 10 operating system in 2017 has paved the way for the one-time convertibles and detachable in terms of good usability. With the new Acer Spin 7 laptop, the Taiwanese company wants to shake the industry neatly and shows itself not only with an extremely slim housing but also with a fanless construction.
Just 11 millimeters is only measured by the well-machined aluminum housing, which is also easily stowed with a weight of 1.2 kg.
The 14-inch display of the Acer notebook also has a much thinner frame and the 360-degree hinge also leaves a good impression in the test. The transformation from a conventional laptop, through a presentation display (Tent Mode) to the tablet, is just as easy as opening a book.
In the area of the input devices, our Acer Spin 7 SP714-51-M6LT is based on a normal-sized Chiclet keyboard with individual keys.
Due to the low overall height of the Convertible notebook, the stroke is comparatively low. Similar to the Butterfly keyboard of the 12 inch Apple MacBook’s, multipliers have to get used to the lower feedback and the soft pressure point.
Acer in this 2-in-1 model has not managed to block LED lighting for the keyboard. The comparatively large touchpad, on the other hand, is appreciated by the editors. Even if users have to take care that they do not accidentally trigger the multi-touch pad with the handlebars when using the keyboard.
The connections of the Acer Spin 7 notebook are quickly enumerated. While the left side of the housing only has the power switch and a volume rocker, we find on the right side a jack port and two USB-C 3.0 interfaces. 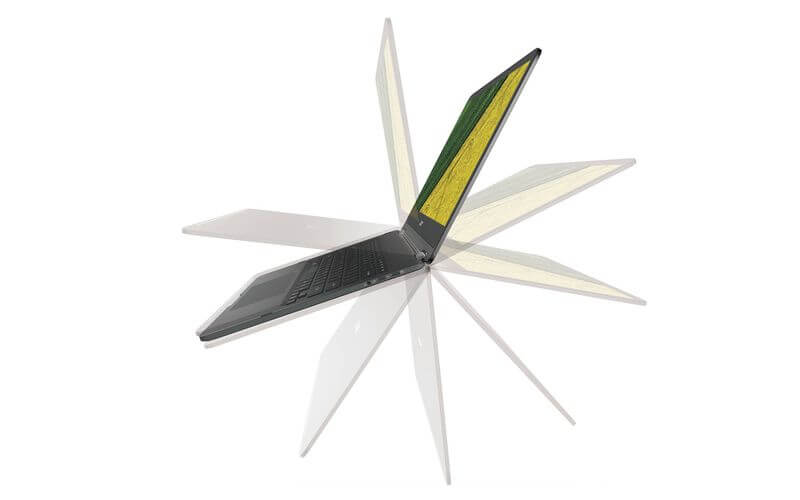 In addition to connecting accessories, the latter are also used to charge the Convertible laptop via the power supply. Due to the still small adoption of the new USB standard, Acer is providing a suitable adapter from USB-C to the normal-size USB Type-A.
It is powered by a fast WLAN-ac module including Bluetooth 4.0. At the factory, the Acer Spin 7 SP714-51-M6LT also offers the Windows 10 Home operating system mentioned in the introduction in the 64-bit version.
Under the slim metal housing works an Intel Core i7-7Y75 processor. The two-core chip (Dual Core) calculates at up to 3.6 GHz and brings the integrated Intel HD Graphics 615 graphics unit.
It originates from the well-known Intel Core M series and shows with a low energy consumption of only 4.5 watts as well as in combination with 8 GB of RAM. The passive cooling inside the Acer Spin 7 notebook allows silent operation without a fan. 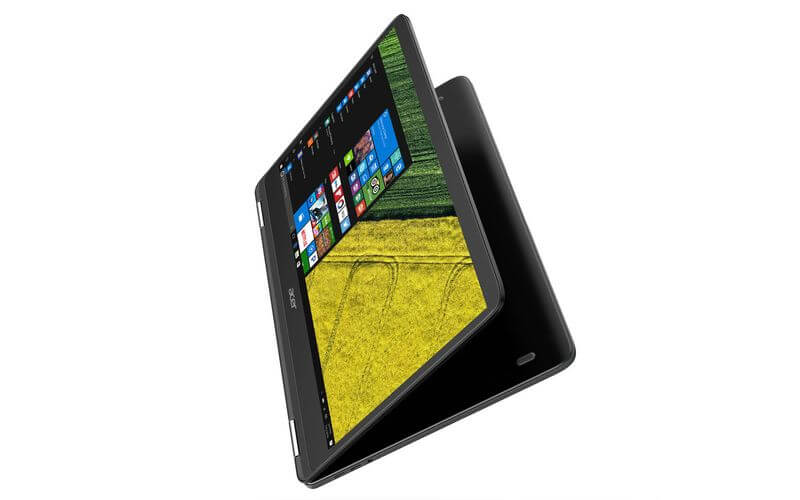 Despite the Core i7 designation, the performance is not comparable with that of its large Quadcore brothers.
The performance of the Acer laptop is, however, quite sufficient for daily everyday use on the Internet, in applications such as Microsoft Office or when viewing images and films. Above all, the installed 256 GB SSD accelerates the system in this regard, even if only maximum transfer rates of 550 MB / s are offered.
The Acer Spin 7 SP714-51-M6LT is no more suitable for more complex tasks, for example for the professional photo- and video processing. For these scenarios, you should look more in the Aspire or Predator portfolio of the manufacturer. 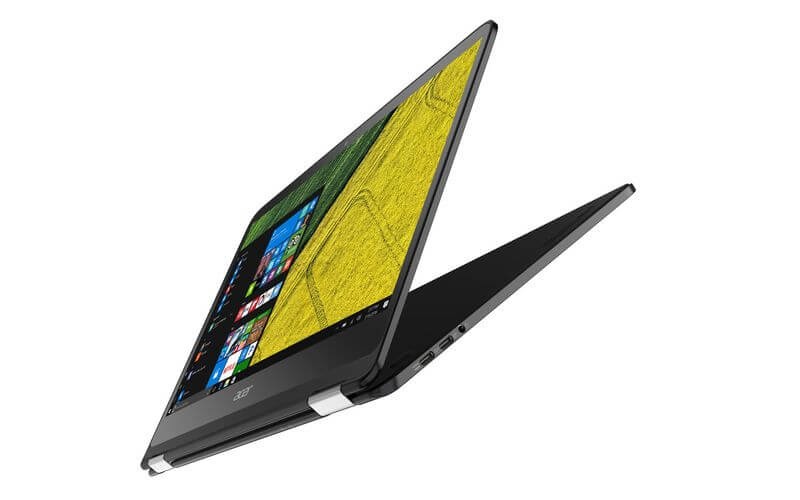 In terms of the screen, our Acer Spin 7 laptop features have a 14-inch display with the popular FullHD resolution of 1920 x 1080 pixels. The IPS panel provided with Corning Gorilla Glass 4 shows good color reproduction and a high contrast of more than 1200: 1.
In the test, however, we only measure a maximum brightness of 305 cd / m2. An operation with direct sunlight or light irradiation could thus be difficult due to the glossy surface of the touch screen.
However, a brighter display would also result in a lower recharge time, which according to our measurements is about 7.5 hours in normal mixing. We are delighted by the low heat generation of the housing, which is also no hotter than 30-34 degrees Celsius without a fan.

The Acer Spin 7 is a good litter in the field of convertible notebooks succeeded. Our configuration under the name AcerSpin 7 SP714-51-M6LT was convincing in the test and leaves it accordingly with a good evaluation. 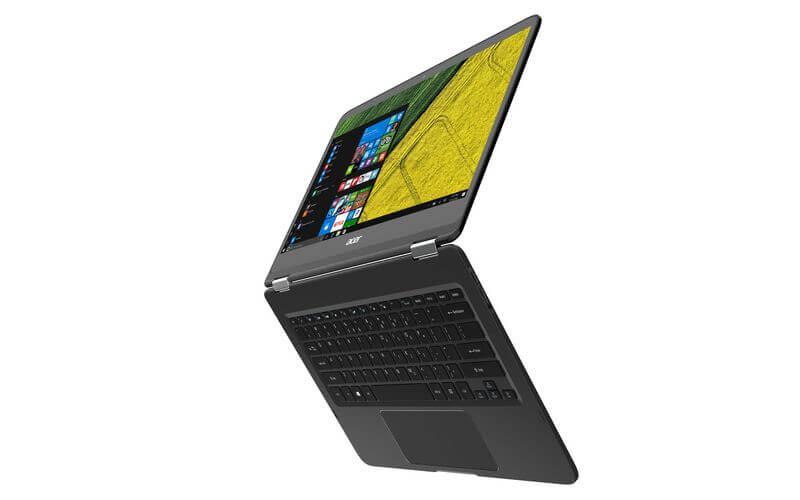 Especially the slim, light and well-machined aluminum housing proves to be a good and flexible companion. Important features such as the keyboard, the display, and the battery life cut off well, even if in a few places more or less significant deficiencies have crept in.
The offered performance is sufficient for the simple office and multimedia everyday life, whereby the Acer Spin 7 laptop even without fan always cool surfaces can exhibit.
In the future, the manufacturer could improve the speed of the SSD, the maximum possible brightness of the screen and the use of a keyboard illumination. Who is currently looking for a good 2-in-1 and convertible, can be synonymous with the Acer Spin 7 almost unscrupulously?