Microsoft has apparently already started production of the SurfaceBook 2 and could present it in March or early April 2017. This can be inferred by current information from Asian industry circles. The presentation of improved surface devices would indeed fit well into the upcoming delivery of the Windows 10 Creators Update. 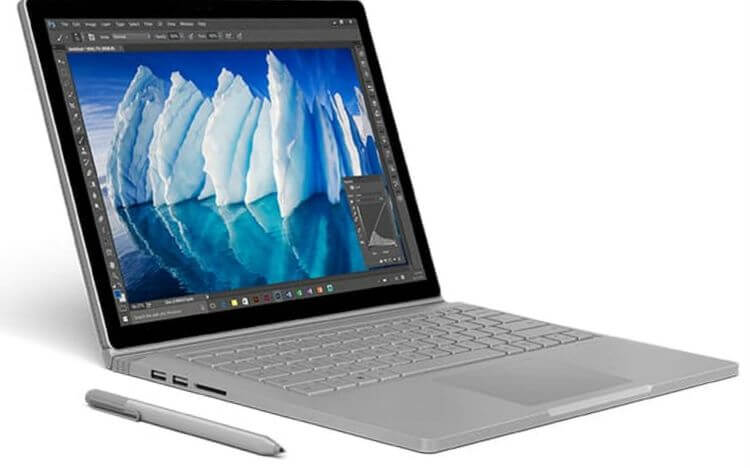 After a bit more quiet about new Surface products from Microsoft, there are now fresh rumors about the next generation of the Surface Book. As DigiTimes reports on sources from industry circles, the serial production of a device named Surfacebook 2 has already started. Microsoft could imagine the new model before the end of this month or early April.
The article by DigiTimes contains almost no illuminating information on hardware details of the SurfaceBook 2 but brings a potential design feature of the upcoming mobile PC into the game, with which probably hardly anyone expected. So the new generation of the SurfaceBook is no longer a 2-in-1 device, but rather a classic laptop (“clamshell design”), thus a normal laptop without a removable tablet unit.
Of course, this info can be heard in several ways. Microsoft is to have decided mainly for cost reasons to cancel the seemingly upward-driving 2-in-1 construction at the Surface Book 2. The high price, which is due for the Surfacebook available since the end of 2015 as well as its discreet rework with performance base, led to a relatively low demand. According to DigiTimes, Microsoft is to have “only” about 500,000 copies of the SurfaceBook sold in 2016. Due to the design changes, the entry price for the second generation will soon be no longer at 1499 but in 1000 US dollars.
These digits of DigiTimes sound plausible at first glance, but on closer inspection, they only make a limited sense. It would certainly be the case that Microsoft would sell more copies of the Surfacebook if the price was lower, but this economic aspect must have been taken into account by the company more than 1.5 years ago in the planning of the market launch of the first Surfacebook. However, the surface family was designed from the outset as a relatively high-priced, innovative product series, the most important property of which is the 2-in-1 concept. If Microsoft wanted to bring a simple laptop at an attractive price on the market, it could have done that long ago.
In the face of Microsoft’s hitherto slammed route for surface products, there are several big question marks behind the statements of the DigiTimes article. On the other hand, the speculations are not entirely different. It should be remembered that a more favorable Surfacebook without Convertible features could have a significant impact on the entire Windows notebook market. Microsoft’s hardware partner in this already very competitive business field would be certainly not happy if the Surfacebook 2 as DigiTimes predicted in the remaining year 2017 1.2 to 1.5 million times would sell. Especially when this is considered in combination with the second sales forecast of the publication: The Surface Pro series, which would also have to be updated, should even reach a sales volume of up to 6 million pieces this year.
In any case, it will be very exciting in the next few weeks to see if Microsoft actually makes the presentation of the 2017 surface products as described, and if so, what features they offer. In the future, the presentation of new hardware would fit well into the forthcoming release of the Windows 10 Creators Update. With regard to the technical details of the upcoming Surfacebook 2, the DigiTimes article merely calls a 13.5-inch display and high-quality magnesium-aluminum alloy housing.
Source: DigiTimes
Microsoft SurfaceBook 2 is not a 2-in-1 and comes in April was last modified: March 21st, 2017 by Boby Sanburn