Kickstarter campaign has created an iPhone case called Eye that not only protects and recharges your smartphone, but also adds Android 7.0 nougat to the back of your iOS device. The case combines all the advantages of the competing operating systems of Apple and Google – including headphone connection. 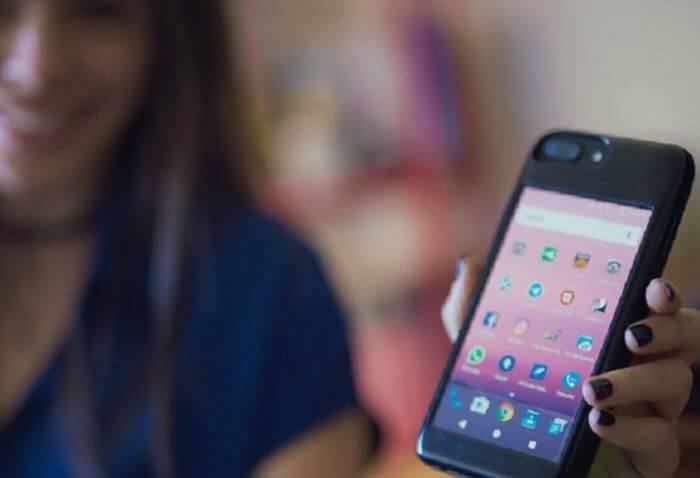 On the question, Android or iOS divorced for many years the ghosts. Both operating systems bring their own advantages and disadvantages. The eye could make the decision for Undecided at least a little easier. So you turn your iPhone with the protective cover into an Android device.

So on the back of Eye is a five-inch full HD display – which shows you a pure Android version 7.1 nougat. On the cover is, therefore, a full-fledged Android system with its own chipset. The manufacturer provides an updated warranty of two years. But the cover has much more to offer. For example, iPhone 7 (Plus) owners are looking forward to a headset connection, which is located at the bottom of the case.
Eye also offers its own microSD card slot, which allows the Eye to expand by up to 256 gigabytes – the manufacturer promises seamless data transfer or swapping of iPhone files into the Android system. Memory bottlenecks on the iPhone should be out of the world. In addition, you equip with Eye NFC and an infrared transmitter for remote control of TVs or streaming players on your iPhone.

Furthermore, Eye can rely on its own 2.800 milliamps strong battery, which can charge simultaneously to the iPhone also the iPhone. This can be recharged by a suitable charger, which also acts as a stand, also wireless. In addition, Eye swallows two SIM cards. In addition to the iPhone-SIM, you can use your phone with two additional numbers. A highlight of the cover is, however, without the doubt, the option to snap selfs.

When setting up a dual SIM smartphone, there is a lot to consider. Awaqa tells you how to configure your model optimally.
So you are no longer dependent on the lower-resolution and less well-equipped front camera, but you can make self-portraits with the iPhone main camera, without taking pictures in the blue – the live image of the camera will be displayed on the back. In addition to the better picture quality with an appropriate iPhone, you also have an optical image stabilizer available. Without eyebrows, you cannot get away with Eye. Overall, your iPhone with Eye grow to a thickness of 13 millimeters and makes this depending on the execution by at least 90 grams.

The eye is expected to be delivered from September 2017 onwards. Currently, designs for the iPhone 6 (Plus), iPhone 6s (Plus) and the iPhone 7 (Plus) are in the planning. Also, the upcoming iPhone 8 models are to get an eye case. The financing target was the US $ 95000 and was already significantly exceeded.
You still have time until mid-April to support the campaign itself and secure an Eye. The prices start at the US $ 95 (about 89 Euros) depending on the equipment. For Eye, there should also be technical specifications in different versions.
Android or iOS: A cover called Eye takes you the decision was last modified: March 14th, 2017 by Boby Sanburn