Mar 28, 2017
Often laptops are used as a daily tool for elementary printing, while at the same time not excluding games and watching videos. To become the owner of such universal devices is doubly pleasant, since you get a device for a wide range of tasks. How is it with the filling of these laptops? Perhaps there is no definite answer, because it seems quite powerful for one user, in the opinion of the other it looks like the most usual office notebook, nothing more. 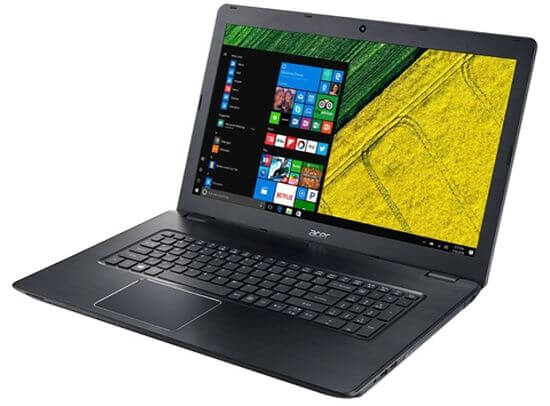 The company Acer has a well-known not for the first year line Aspire, which includes quite diverse in terms of productivity universal models.

For example, in the Aspire F family, you can get acquainted with devices equipped with modern stuffing. Their manufacturer positions itself as a powerful solution for everyday tasks. One of these laptops, which will be discussed in the review, is the Acer Aspire F5-771G-31JJ. First glance indicates that we have a simple laptop for work. How to know, can the opinion be mistaken? 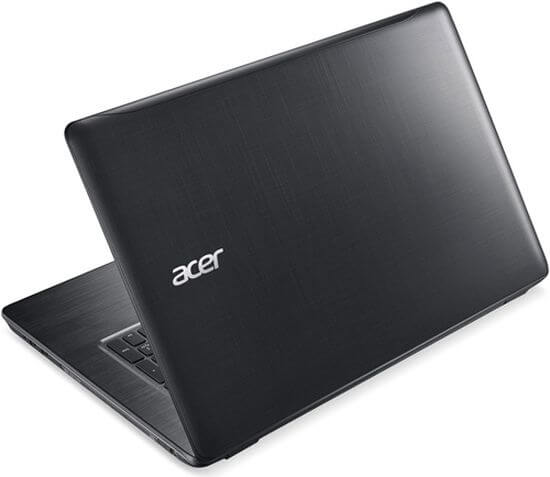 The Acer Aspire F5-771G-31JJ notebook looks business-like, thanks to its black color and the severity of its form. On the dark cover of the device is the manufacturer’s logo, except for it, there is a texture. It allows the laptop to look less ascetic, to attract the attention not only of the strong but also of the weaker human gender.
Inside the laptop is not used a pattern for textiles, but grinding. It looks no less attractive, but just like the first version, it collects a lot of fingerprints. True, we must pay tribute, from the matte surface of the device they are erased quickly. Also in the interior is the keyboard area, touchpad, in addition, you can see the lens of the webcam, which is on the display frame. 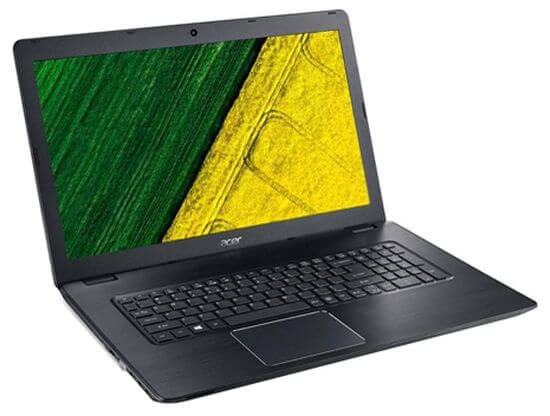 The bottom of the laptop is a panel with a compartment for access to internal components. In addition, there is a relatively large ventilation hole and two speakers of the speaker system. The lower part of the body, like, however, the upper one is well assembled, it does not creak, and when you try to push it, only the cover lends itself slightly. If we talk about gaps, then at a cursory examination they were not noticed.
The dimensions of the laptop 423.3x282x32 mm may not seem compact enough, but for the 17.3-inch gadget, they are entirely expected. As for the weight, then 2.9 kg, of course, is not the best option to constantly carry the device with you. Probably, most often you can use it as a home or office laptop.

The Acer Aspire F5-771G-31JJ screen has a diagonal of 17.3 inches and an optimal resolution of 1600×900 pixels for comfortable operation with several open program windows. The surface of the widescreen display is made of glossy, conveying a rather juicy image. The brightness is enough to work indoors. Unfortunately, the street is not an option, the picture will have to look closely. As for the font and size of the icons, it will be quite suitable for many. 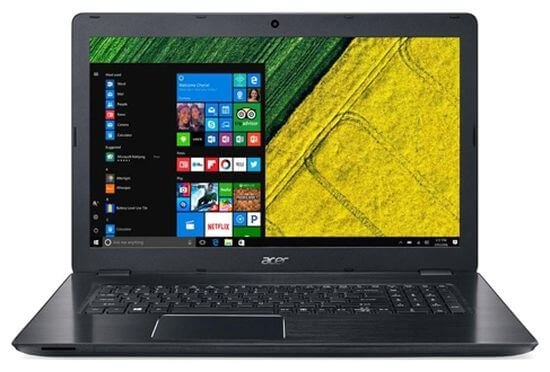 The speakers of the laptop are on the bottom, which directly affects the volume. The sound is partially lost, but if it is not enough, you can always plug in the headphones. By the way, acoustics is dominated by high frequencies, and low ones are practically not felt. Ultimately, you will not hear the depth of sound, you will have to settle for it not by its balance, but by the purity, which remains even at maximum volume.
As for the webcam, its HD resolution will be enough to organize video conferences, often in demand. True, the image quality here is not the best, with a naked eye can see a slight blurriness.

Naturally, the 17.3-inch form factor has enough space to place a full-size keyboard within the work area. The island block pleases with the optimal distance between the buttons, the standard layout, clearly marked symbols on the flat surface of the keys, as well as the middle stroke and springy feedback. 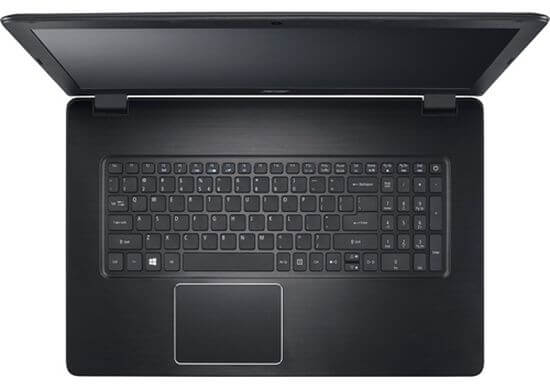 There is no backlighting, but there is a and that simplifies the input of numerical data. As for the switch block, only two buttons turned out to be greatly reduced, and they will have to get used to them. By the way, it takes the time to blindly not touch the power button of the laptop, located in the upper right corner.
The touchpad is not too large, however, for positioning it is convenient, has excellent sensitivity, quick response to commands. The touchpad of the laptop supports multi-touch gestures. They can be performed with two fingers (scaling, scrolling) or three (switching between open program windows or calling a Cortana assistant). There are no separate mouse buttons under the touchpad, you will have to press in the zone of the touchpad in the right and left lower corners.

The Acer Aspire F5-771G-31JJ (NX.GEMEU.002) runs on Linux, which does not prevent if you install the Windows operating system instead. The manufacturer has put here the dual-core processor of the last generation of Kaby Lake. Intel Core i3-7100U refers to low-voltage chips with a TDP of 15 watts. It is built on 14-nm technology, has a clock speed of 2.4 GHz and a cache memory of the third level of 3 MB. The processor has enough capacity for many modern computing operations. 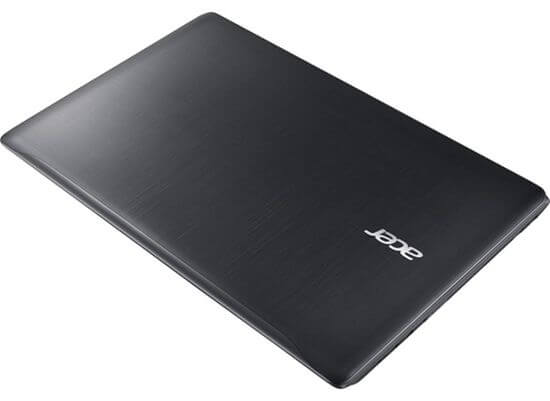 In addition to the integrated graphics card Intel HD Graphics 620, the notebook also includes a discrete NVIDIA GeForce 940MX. Each of the accelerators is aimed at certain tasks. For example, for web surfing, viewing multiple video clips, working with documents in office applications, the performance of the integrated HD 620 will be sufficient. It supports DirectX 12, but uses only a part of the system memory and has only 24 unified streams. Its maximum frequency does not exceed 1000 MHz.
In the case of more complex graphical calculations, it is worth using the power of the mid-level discrete GeForce 940MX video card. It also has DirectX 12 support, but unlike the Intel HD Graphics 620, it uses its own 4 GB of video memory. Of course, the performance of the accelerator is not so high as to deal with demanding modern games on ultra, however, in such as Call of Duty: Infinite Warfare or Battlefield 1, you can always play at medium settings and resolution of 1366×768 pixels with a frequency of 30 fps.
The amount of RAM in this configuration is 4 GB. RAM has a DDR4 standard and a bus frequency of 2133 MHz. As for the drive, its role is played by a 1 TB hard drive with a speed of 5400 rpm. Thus, space should be enough for various content, including multimedia.
In general, judging by the filling, Acer Aspire F5-771G-31JJ is able to become the owner not only a good option for office tasks, but also an optimal solution for entertainment.

As you can see, most of the ports and connectors are centered on the left side of the laptop. Here we see two USB 3.0, a more modern USB Type-C, an analog VGA output, digital HDMI, as well as an RJ-45 network port and a Kensington lock slot.

But the right side has an optical drive DVD-RW Super Multi, two USB 2.0, as well as a recharging slot and a connector in which the microphone input/headphone output is combined. As for the SD card reader (SDHC / SDXC), there was a place on the front side of the case. There are also two LED indicators (the work of the laptop and the state of the battery charge).

In the laptop, there are wireless communications Wi-Fi 802.11 ac and Bluetooth 4.0. There is no 3G support.

In the case of the laptop is a rechargeable battery with a capacity of 2800 mAh, recharged by a 65W power supply. The lithium-ion battery has four sections, it allows the laptop to work on one charge for no more than six hours when it comes to reading mode.

Perhaps, the price tag of the notebook Acer Aspire F5-771G-31JJ, which is about $ 630, can be called more than appropriate, based on the filling of the device. So, the user will get a productive video card NVIDIA GeForce 940MX, low-voltage processor generation Kaby Lake, 4 GB of RAM. In addition, the laptop will be pleased with a convenient keyboard, all the necessary ports, and connectors, and not too much weight, as for the 17.3-inch device.
If you are looking for laptops that provide the opportunity to play games, watch movies in good quality, and just work with comfort, then you definitely should not discount the Aspire F5-771G-31JJ model.