Mar 2, 2017
February 27 in Barcelona showed the Japanese Sony Xperia XZ Premium is the first true flagship smartphone 2017 has incredible specifications. New thought literally to the last detail: from the “Hardware” and ending with the excellent camera. 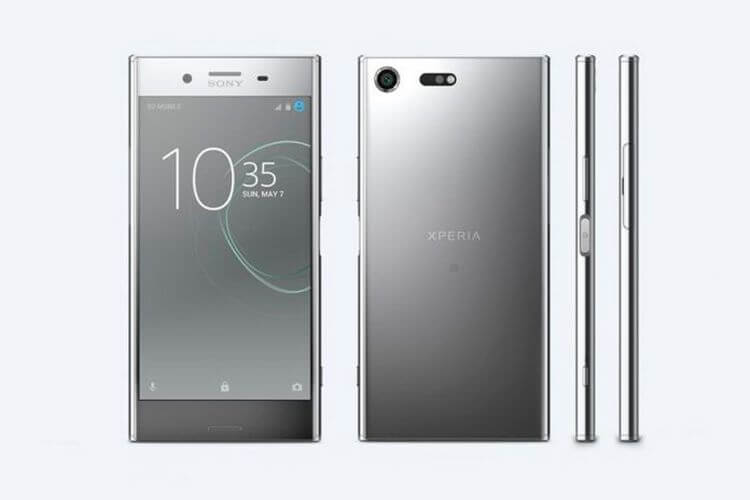 Xperia XZ Premium first got the most powerful and up to date mobile processor Snapdragon 835. Thus, represented in the 0-th day of the exhibition MWC 2017 Huawei P10 and LG G6 with last year’s chipsets it and it does not hold a candle among smartphones.
Special attention deserves the beautiful simple design: the display without side frames, durable metal body frame and protected by impact-resistant glass Corning Gorilla Glass back 5 smartphone cover. Xperia XZ Premium without exaggeration wins at first sight.

The Hardware is, as they say, just a song. Powerful Qualcomm Snapdragon 835 submits themselves to any modern app for Android, even the most demanding of resources. For this new product, you can even just 4 GB LPDDR4 RAM (I would like to 6 Gb, but this amount will be enough for “eyes”).

Next: the 5.5-inch screen with a resolution HDR with 4K UltraHD 3840 × 2160 pixels, which supports technology TRILUMINOS and X-Reality. The matrix covers 138% sRGB color space. Supports Dynamic Contrast Control. And from external influences, it protects the safety glass Gorilla Glass 5.

It’s adding just incredible bulk Motion Eye camera with a resolution of 19MP and the possibility of video recording at 960 frames per second. Now even the smallest movement will not escape from the Xperia XZ Premium. Professional slow motion is in your pocket. 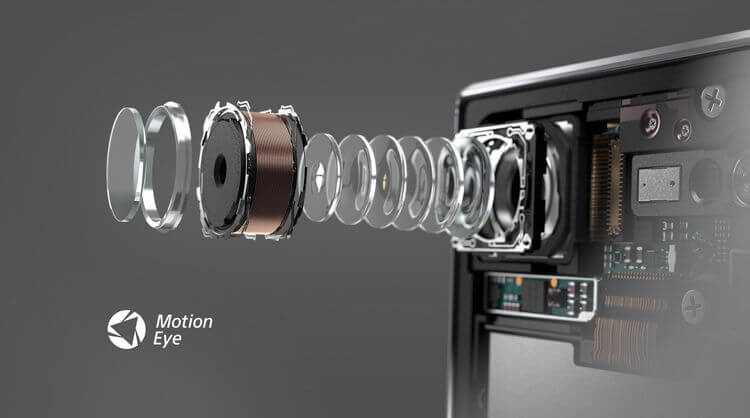 Large format Exmor RS sensor 1/2.3″ with a pixel size of 1.22 mm provides high ISO values (ISO 12800 and ISO for a photo 4000 for video) and low levels of digital noise. Autofocus has Predictive Hybrid. Full time, camera start is 0.5 s. It is also interesting that the module is equipped with its own RAM. 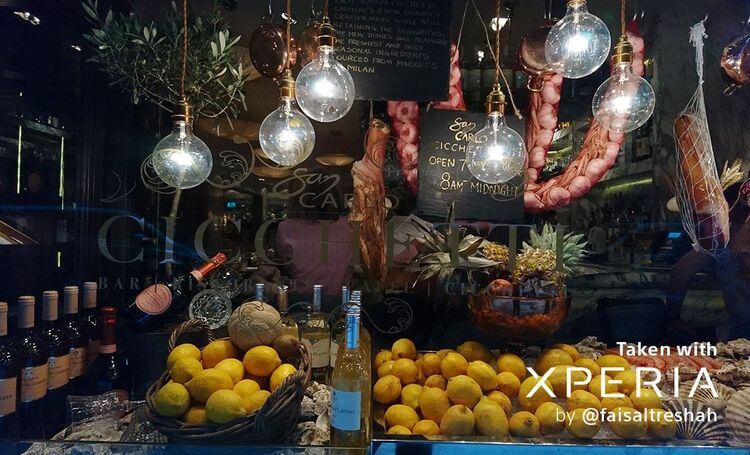 The front facing camera is also perfect: 13MP resolution with sensor 1/3.06 “Exmor RS, wide-angle lens with a focal length of 22mm and an aperture of f / 2.0. So, there is a high values ISO (6400 to 1600 for photos and videos). Even optical SteadyShot 5-axis is as in the main module. So the “selfie” without exaggeration be BOMB!
Thanks to Sony Xperia XZ Premium Front Camera your selfie are always the best. 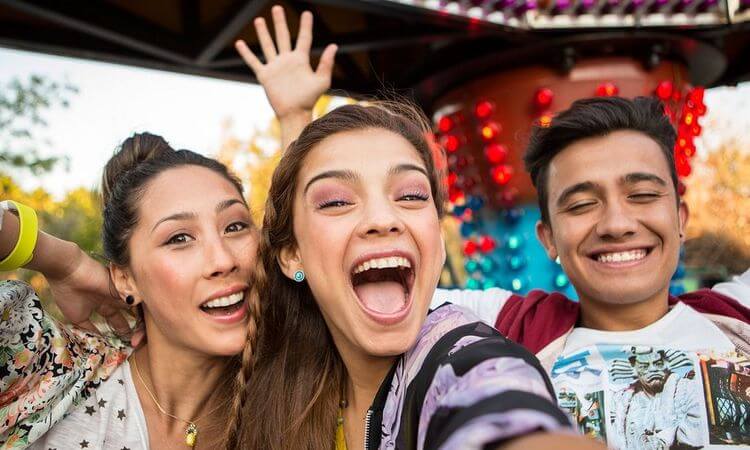 .
So if you need a hard-edged “camera-phone” is boldly take Sony Xperia XZ Premium: it will not disappoint you. You do not have any fancy bells and whistles such as dual cameras, because powerful sensors from Sony “make” any competitors.

The Xperia XZ Premium is not in Samsung Galaxy S8 eventually became the first smartphone with support for Bluetooth v5.0. This means not only twice the data rate as compared with BT v4.1, but increased four times the range of the transmitter.
New Sony can work in 4G LTE Category 16 networks, so it can safely be called as the first “smartphone gigabit”. The speed data download with the appropriate equipment at the mobile operator increases up to 1 Gbit / s! The device is available in a version with a SIM-card and Dual-SIM. 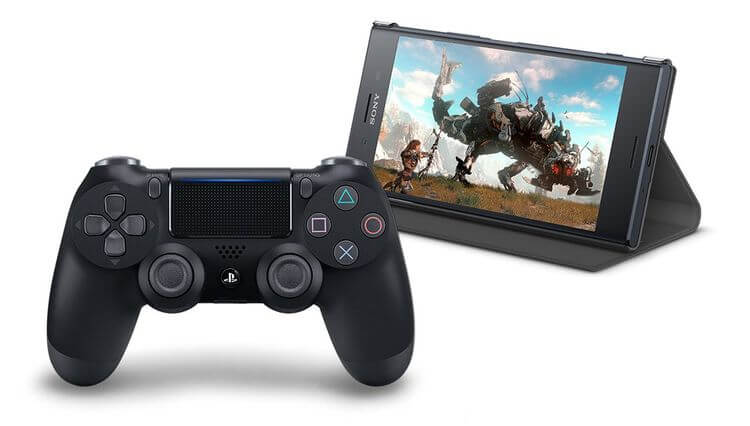 To connect to a PC and external OTG devices used modern port USB Type-C 1.0 format, the data transfer rate of USB 3.1. Among other communication interfaces should be noted NFC, dual-band WiFi and mixed navigation A-GNSS (both GPS + GLONASS).
Owners of consoles Play Station 4 and be happy with the presence of PS4 Remote Play option for remote control of the game console.

Sony Xperia XZ Premium has a relatively modest battery capacity on 3250 mAh, but thanks to the support of technology Qualcomm QuickCharge 3.0 smartphone owners do not have to fast-charge a long time to sit at the wall outlet. 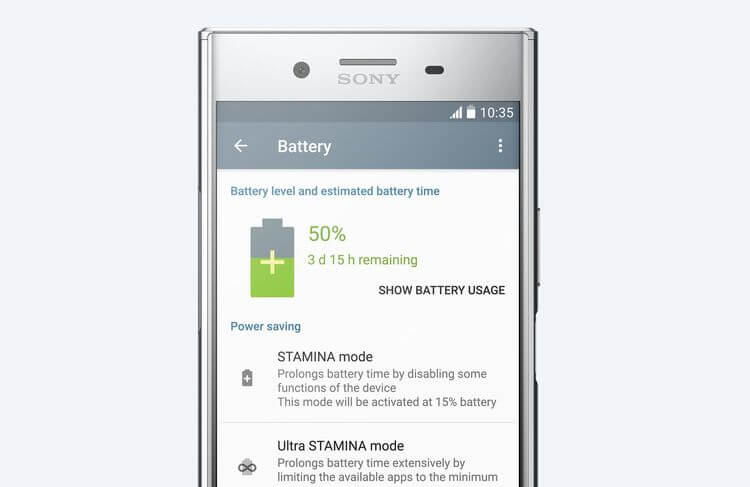 For energy saving corresponds to multiple technologies is Smart Stamina, Qnovo Adaptive Charging, Battery Care and STAMINA Mode. So, the 3250 mAh battery is quite enough for a day, and even on two. Due to the Xperia XZ Premium camera’s own memory consumption during shooting considerably less energy.

Unlike many competitors, the new flagship of Sony is running the latest version of Google Android v7.1 (Nougat), and not just 7.0. The system has undergone relatively little customization that promises greater speed.

New Xperia XZ Premium has a relatively large and heavy device. With dimensions of 156 x 77 x 7.9 mm, it weighs as much as 195g. But the smartphone is protected against water and dust according to IP68 standard. 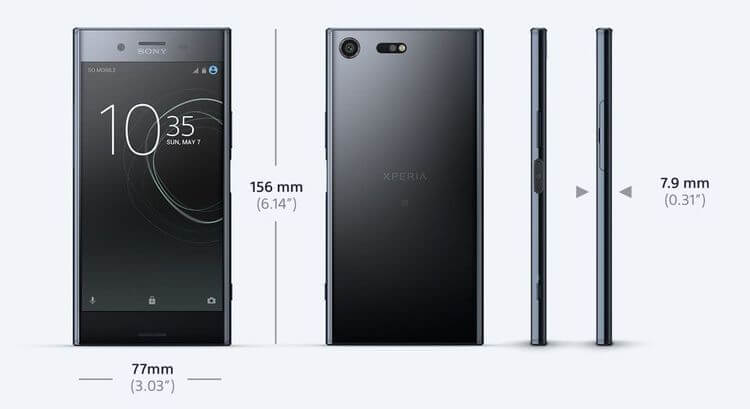 When injected into the liquid medium, the system blocks the machine USB ports Type-C and the headphone jack / 3.5mm headset until they are completely dry.

The exact timing of the launch of new items on sale Sony representatives has not yet shared. According to unconfirmed reports, in Japan, sales of Xperia XZ Premium will start in April, but the rest of the world will have to wait until May, some countries is even before June. 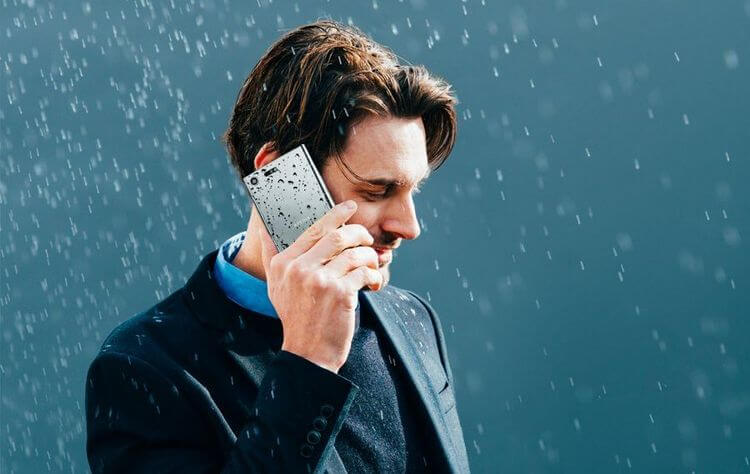 At the site of Sony, we have sought to bring a new “premium” Xperia XZ on the market as soon as possible. If it happens in March, then the Japanese leader will simply not be competitors. In April, the same should be tightened Samsung Galaxy S8 and Xiaomi Mi6, so that the situation would be far less straightforward.

The expected price of a smartphone at the time of the start of sales in Europe is – $950 – $1000. For the money the new Sony is just the perfect purchase. The only caveat, which we mentioned above, company is not necessary to delay the start of sales.
In any case, Xperia XZ Premium as a smartphone is almost perfect and it is worth a closer look, if not constrained by budget.