Mar 17, 2017
The Medion P7648 notebook will be launched in the ALDI Nord stores on 8th December for 899 euros. Compared to the competition, Medion is again able to achieve the best price/performance ratio of its class with its 17-inch model. 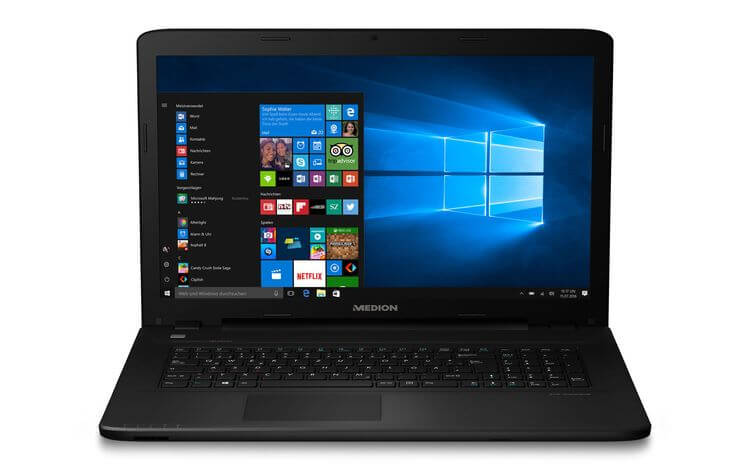 In the test, we look at the notebook with Intel Core i7 processor and Nvidia GeForce GTX 950M graphics card more accurate. And once again, we ask ourselves the question: Is the way to the grocer next week Thursday?
As in December 2015, a powerful 17.3-inch laptop from Medion will be launched at the Nord-Discounter of the ALDI chain this year. The housing has not changed in the last 12 months. The Medion P7648 also has a black plastic design with soft touch elements and a discreet look. With a weight of 2.85 kg and an overall height of just 28 millimeters, the notebook remains comparatively mobile and does not look clumsy. The processing is in the value for money measured in order. 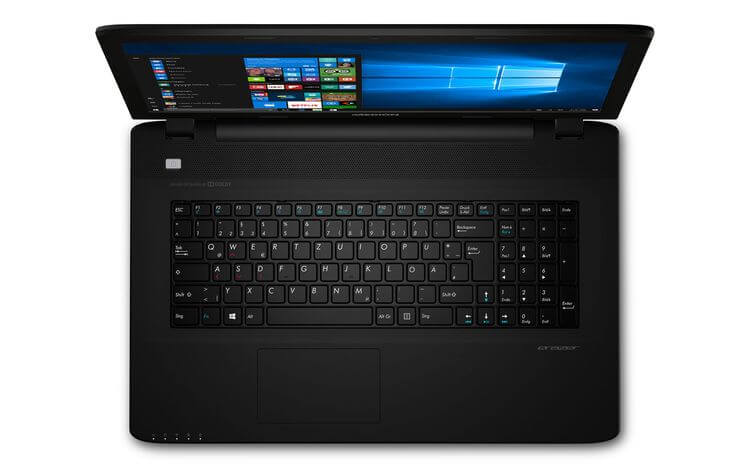 Only in the area of the lid and above the DVD drive are slight distortions detected. However, these are only negatively affected by course, practical handling. The input devices are well dimensioned and the keyboard has a separate numeric block. Above all, in the right-hand area, however, the key is pressed against a hard stop, combined with a slightly clattering sound. We also miss a keyboard lighting. We are, however, satisfied with the touchpad with its integrated matte buttons (click pad) and multi-touch function.

Solid design, but too much USB 2.0

Also with regard to the connections, everything remains the same. Almost, the new ALDI notebook now uses Bluetooth 4.1 instead of Bluetooth 4.0. The four available USB ports are as follows: 2x USB 2.0, 1x USB 3.0 and 1x USB-C 3.1. Enough interfaces, therefore, to connect current accessories with the Medion P7648 (MD 99980). 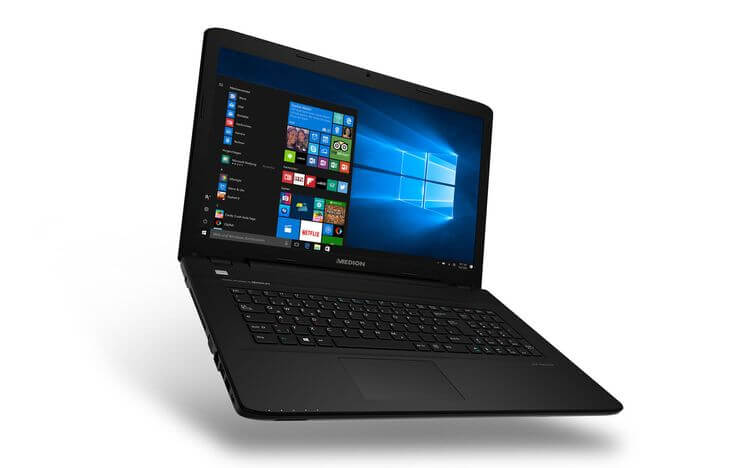 External monitors, beamer or TV can also be connected digitally via HDMI or analog via VGA. On the Internet, we can optionally be connected via cable to Gigabit Ethernet (LAN) or wirelessly with the WLAN-ac module.
The notebook is charged via a proprietary power supply, at the front, our test unit receives SD cards and, of course, a DVD burner is also on board. Microsoft Windows 10 Home is pre-installed in the 64-bit version of the operating system.

Under the hood of the Medion P7648 is a contemporary Intel Core i7-7500U processor with a clock rate of up to 3.5 GHz, two cores, and the new Kaby Lake technology. In combination with 16 GB of memory and the Nvidia GeForce GTX 950M, we meet a strong multimedia package. Although the case is printed with the Eraser logo, we do not see the notebook as a pure-bred gamer. 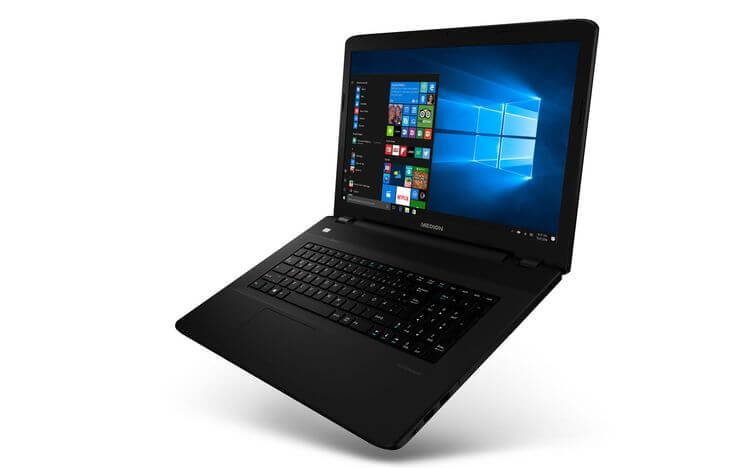 Especially in times of the new Nvidia GTX 10 family, the graphic card used here and the ULV processor from an entry into the world of the players. The Medion P7648 (MD 99980) is, however, very good to use as a multimedia notebook for viewing and editing photos, movies and music. Current games have to be run with medium to high details to get liquid on the screen. These include titles like Dishonored 2, Titanfall 2, Battlefield 1, and FIFA 17 or overwatch.
For mass storage, our test device is equipped with a 256 GB SSD and a 1 TB hard disk. Especially the solid state drive is reading and writing speed between 440 and 506 MB / s good values. Of course, it is much better at times of PCIe NVMe flash memory, which works at up to 2 GB / s, but the system is already accelerated by the SSD used here, so that system and program starts can be managed quickly. Last year we were not able to determine the hard disk fine pen we had in the current 2016 model.

The 17.3-inch screen of the new ALDI notebook shows a resolution of 1,920 x 1,080 pixels (FullHD). Furthermore, it is equipped with the angle-angle stable IPS technology and has a low-reflective, matte coating. On average the brightness is 300 cd / m², which has a negative taste in spite of the positive panel properties in outdoor use in sunny places or in very brightly lit rooms. 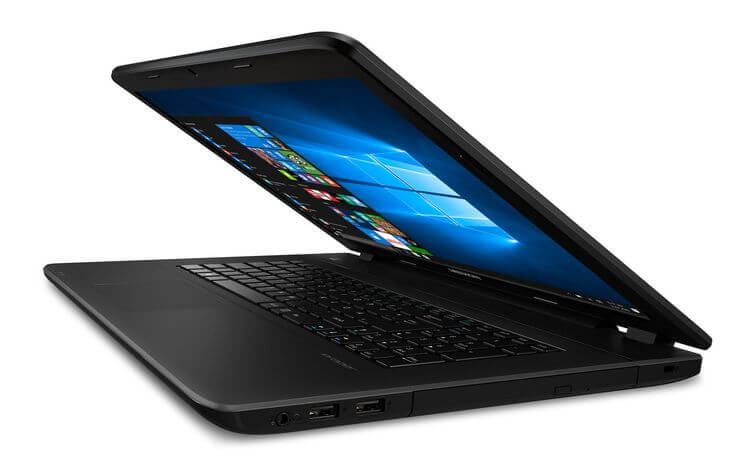 Much better would be the Medion P7648 (MD 99980) with an illumination over 350 or 400 cd / m² had been placed, even if a 17-inch laptop will probably find more at the domestic desk. The contrast of 1000: 1 measured by us can be seen, however.
Because of the efficiency increase of the Intel Kaby Lake technology, the P7648 brings a little more runtime out of the 47.5 watt-hour batteries than its predecessor last year. The advantage, however, lies only in the minute range and requires a user-friendly energy budget. With dimmed display illumination and deactivated radio connections, we determine a maximum battery life of 7.5 hours. With full utilization of all components, 1.5 hours remain.
The practical mean value is therefore 4.5 hours. The heat and sound development are noticeable. The ALDI notebook remains comparatively cool even in demanding scenarios and turns its fans only in rare cases above the 33 dB (A) limit.

The Christmas shop is in full swing, and for the feast of love, we know more for us and our friends. A reason why probably also ALDI in the next week by technology-cheap homes, and instead with the Medion P7648 (MD 99980) for 899 euros a powerful multimedia notebook placed on the shelves.
As in the last year, Medion can offer a good price-performance ratio, which more or less significantly undercut the competitors. It’s just as little as the price has changed the installed technology of the 17.3 inch. The processor was updated and the memory doubled, but with regard to the graphics card, the SSD and the connections of the notebook there are no innovations to determine. So if you already own the Medion P7644 from the year 2015, you can sit back and relax.
All those who are currently looking for a high-performance and not too expensive multimedia notebook should look at the ALDI model offered to start next Thursday (8 December). The case, the input devices, and the processing are not perfect, but solid.
In addition, it’s a good processor performance of the Intel Core i7 chip and a multimedia and lightweight gaming capable Nvidia GeForce GTX 950M. The 256 GB SSD accelerates the Windows 10 operating system very well and the large 1 TB hard disk provides enough space for photo and video archives. On the screen, we would have wanted a better illumination, but we are pleased about the FullHD resolution and the matte coating.
The bottom line can be made with the purchase only a little wrong and the Medion P7648 receives our recommendation.