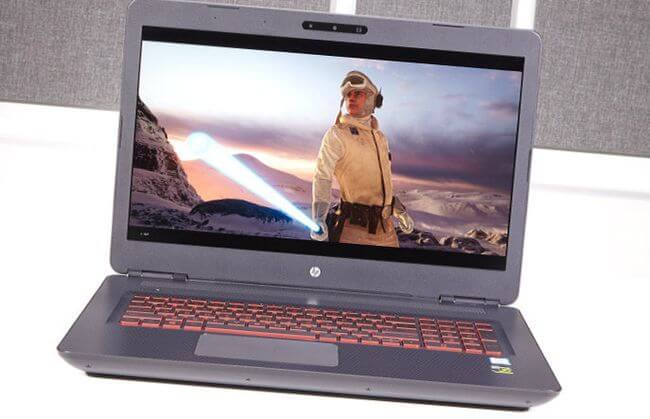 In addition to the upgrade to Intel Core i5 and Intel Core i7 processors of the Kaby Lake generation. We have a closer look at the current maximum equipment.

Already last year the HP Omen models were designated as washable gaming notebooks. The reason for this was the significant upgrade from the mid-range graphics cards Nvidia GeForce GTX 960M and GTX 965M to the significantly more powerful GTX 10 series.
Optically, however, no novelties have been found at the laptops optimized for the players. Hewlett-Packard remains faithful to the comparatively simple carbon look, which due to its distinctive hinges and the red keyboard lighting should appeal both to gamblers and Otto normal consumers.

Despite the plastic surfaces, the HP Omen 17-w240ng tested by us shows a solid processing, which shows slight distortions only in the area of the display (lid). Since the notebook weighs just 32 millimeters and weighs 3.35 kilograms, it is more likely to be used on a stationary desk so we can accept this shortcoming. 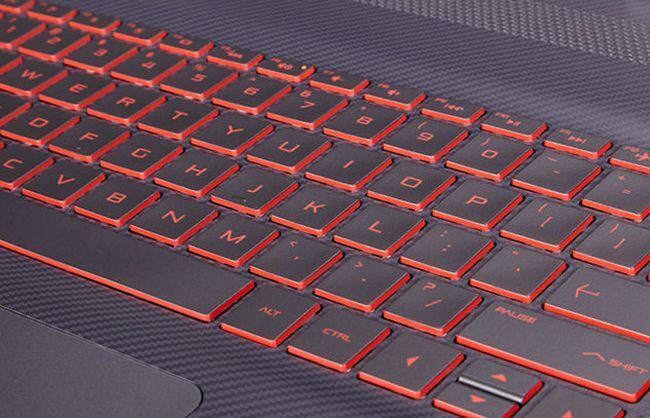 In June 2016 – as today – the input devices of the HP Omen 17 can be seen. A comfortable stroke meets a good pressure point. Many gamers and gamers will be satisfied in this area. However, the weaknesses criticized last year remain unchanged. These include the single-stage, only red lighting, and the single-line enter key. For a price of currently 2.299 euros in the local HP store, we would have expected more personalization options and a better optimization of the German keyboard layout.
Unchanged, but still up-to-date, the connections of the 17.3-inch notebook show. External monitors, televisions or beamer can be digitally controlled via HDMI and Mini DisplayPort. The three built-in USB ports also support the faster 3.1 standards (Gen1, USB-A) and audio ports as well as an SD card reader. Connected to the network is Gigabit Ethernet (LAN), while a WLAN-ac module with Bluetooth 4.2 is available for the wireless connections. A fourth USB port or even the new USB-C slot including Thunderbolt 3 Support would have also confessed to such a high-end model. Bottom line, however, we are satisfied with the interface placement.

HP is jumping into high-end gaming

The top-of-the-range HP Omen 17-w240ng reviewed by us is not only based on the well-known Nvidia GeForce GTX 1070 graphics card with rich performance and 8 GB graphics memory, but also on the new Kaby Lake architecture in the form of the Intel Core i7-7700HQ. The quad-core processor of the so-called 7th generation operates at a clock rate of 2.8 to 3.8 GHz and achieves the usual performance increase of 5-15 percent compared to its predecessor. 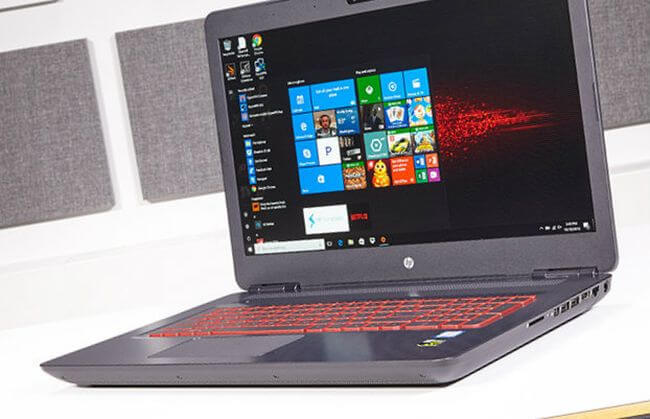 The graphics card (GPU) and processor (CPU) is supported by 16 GB of DDR4-2400 memory, a 1 TB hard drive and a 512 GB SSD in the M.2 format. The latter accelerates the laptop significantly and shows read rates of up to 2,000 MB / s. However, the Solid State Drive is only described with an average 350 MB / s. You can find familiar benchmarks of the notebook at the bottom of this review.
While the favorable variants of the HP Omen 17 put on a FullHD screen with 1920 x 1080 pixels, our gaming bolide shows with a 4K UHD display and the resulting resolution of 3.840 x 2.160 pixels.
This is a matte variant, which is additionally equipped with the Nvidia G-Sync technology. This allows for fluid playing, without so-called tearing or legs problems. 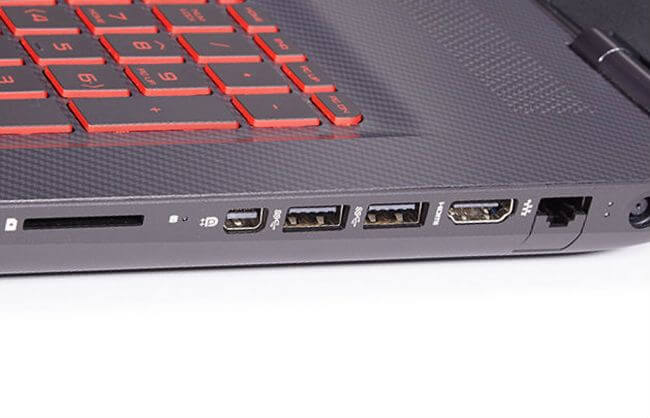 The performance of the game notebook is even enough to handle current titles like Resident Evil 7, Dishonored 2, Battlefield 1 or Titanfall 2 in this high resolution. For the ultimate graphics setting you should, however, the FullHD format prefers and the display in the game correspondingly down-scale.
The brightness of the display has neither developed positively nor negatively. We still have a brightness of 300 cd / m² and a contrast of 700: 1. 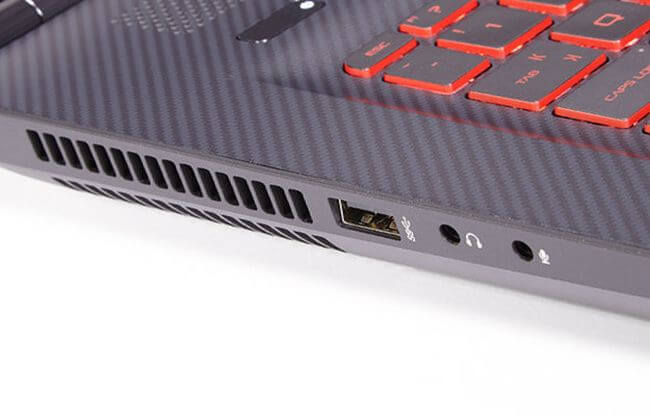 The IPS technology also allows good viewing angle stability and the anti-reflective surface minimizes ambient reflections, for example outdoors or in brightly lit rooms. Likewise, we can live with the inconspicuous heat development (about 32 degrees Celsius).
The volume when playing or in demanding multimedia applications, however, is as obtrusive as last year. Here, HP could help with future BIOS and firmware updates to optimize the fan control. Depending on your performance, the HP Omen 17-w240ng has a battery life of between 2 hours and 7.5 hours on a full load, gaming, and idle range.

If we were still in the summer of 2015 advised against a purchase of the HP Omen 17, now all speaks for the powerful 17.3-inch games notebook. The new Intel Core i7 processor in combination with the Nvidia GeForce GTX 1070 and a fast SSD can really be seen. 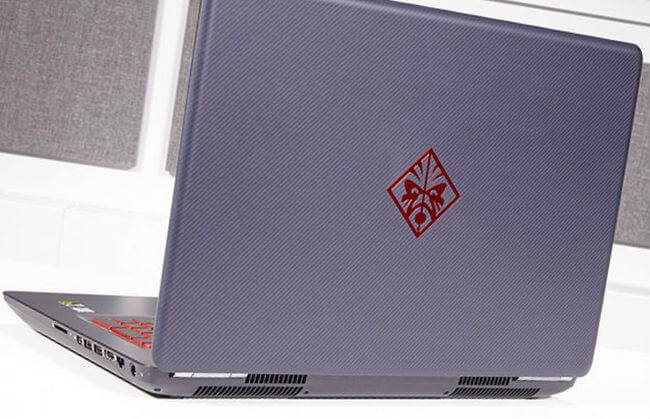 Also, the high-resolution 4K UHD display with Nvidia G-Sync technology shows that HP has missed his omen series a certain gaming fine.
Finally, not only does the exterior appeal to the ambitious gamers, but also to all the components. Even the price-performance ratio is convincing compared to the equally strong competition.
Except for one, two blunders in terms of the input devices and the processing, we can recommend the HP Omen 17-w240ng at any time.
And if you are not warm with a 4K UHD display, you can easily access the smaller FullHD version with 128GB SSD and at a price of currently 1.799 euros even 500 euros save. In any case, most gamers will be satisfied with the new HP Omen configurations.
Source: Laptopmag