It has comfortable fit and control. The solid price is $600. Find out if her specifications, features and sound quality.

Sony MDR-1000X looks in black (this is the version of the Great Britain representation of the company sent me to the test) reserved and discreet. Yes, outside of the cup and headband in the contact zone with the top covered with high-quality synthetic leather headband passes through an elastic metal plate, but the basic material is plastic. 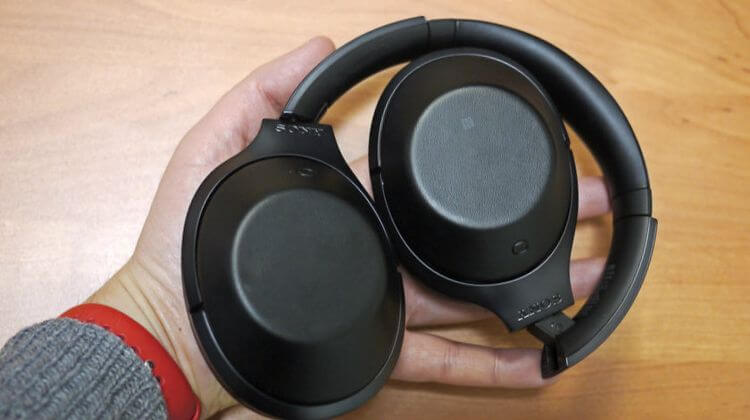 The design is a good simple, minimalist derogation from just a few. The embossed logo of the manufacturer on each “cup” yes plastic inserts on the headband with the inscription “Wireless”. Alternative black silver beige version, in my opinion, looks more and more interesting, although the suit may not be for everyone. Black is modest and stricter.
“Cup” is not round like the majority of the older models of “covering” headphones by Sony, and elongated is personally my ears in such comfortable. In general, the headphones are not only lightweight (275 g), but also very comfortable, you can safely spend in their 8-10 hour flight and did not experience any inconvenience at the end. However, when dinner will bring better “ears” remove is jaw movements respond creaking joints in the structure. 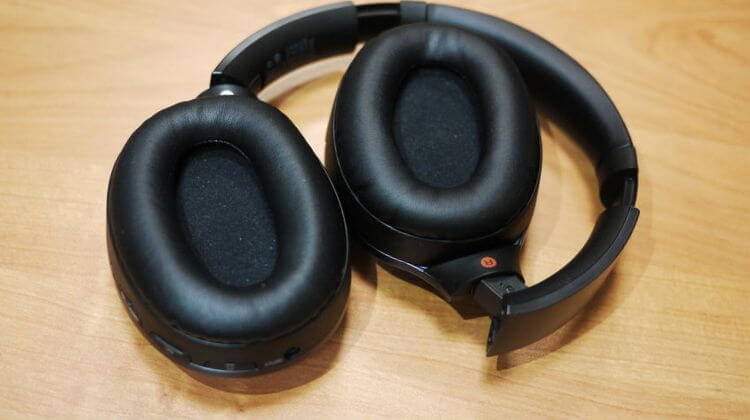 In difficult hinges “cup” Sony MDR-1000X rotate 90 degrees and fold inwards is so easily be placed in a complete semi-rigid carrying case. Cover, by the way, convenient. In it, for example, provided a flexible outer pocket where you can remove the cables and adapters. Included with the headphones supplied quality (core OFC silver-plated, gold-plated plugs 3.5 mm thick corrugated plastic sheath) audio cable, USB-microUSB for charging and adapters for the two-pin connector, used in aircraft seats.

Now, about the technology, they are in the Sony MDR-1000X lay heartily. Important: active noise reduction copes with the low-frequency rumble that in the plane, the subway. At the time of testing had to fly in a couple of trips for 10 hours to Singapore for Airbus A-350, I did not take off the headphones even while sleeping. The effectiveness of noise reduction with regard to the votes less is at least, when a soft quiet music is turned on, the open office colleagues heard better than we would like.
But sometimes it is necessary to get rid of the noise while remaining aware of what is happening around. For such a case there are two modes Ambient Sound: normal, skipping to the user’s ears, the most noticeable sounds (beeps of cars, for example), and the voice, the limited frequencies of human speech. They work, as well as noise reduction, leveraging built-in microphones, a total of 4 pieces.
But what if you just need a few tens of seconds to listen to the world around them? Remove the headphones? With the Sony MDR-1000X has a way even easier: the right is applied to the “cup” hand and after a moment you start to hear everything even better than without headphones, the music at the same time significantly muted, but not put on pause. It is talking with colleagues so probably not very polite, but to listen to announcements in public transport is the most it. Conveniently! I should add that all these functions work with a wireless connection, or via a cable.
On the left “cup” buttons are placed, which will include off-headphones, noise reduction, and “ambient” modes. To the user it easier to distinguish between them, the Sony decided to equip key small flat protrusions of different lengths. But personally, I do not even after a couple of weeks of use MDR-1000X every time there is a doubt whether the desired button I press at the moment. Perhaps addictive just takes longer. 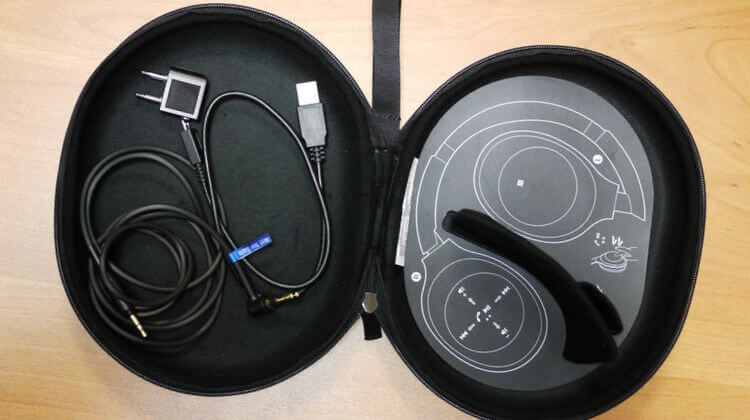 But to the reproduction control, which is implemented with the help of an invisible touch panel on the outside of the right cup, I have nothing to complain about for a couple of hours, I mastered all the gestures. Swipe up or down to adjust the volume, forward or reverse is switch songs in a playlist, double-tap pauses, and answers the call, and press and hold to activate a smartphone voice assistant of Siri or Google Now. Unfortunately, when connected by cable to a laptop (MacBook Pro) Touchpad only reacts to the touch of his hand, but the playback or the volume cannot be controlled.
When running a podcast or audiobook, the iPhone playback control panel displays icons “rewind” and “rewind forward” swipe back and forth allows you to return for half a minute, if distracted and missed something, or jump ahead, squandered advertising. In this panel responds precisely to finger, “rewind” the music by tapping the outside of the “cup” of clothing or the seat back cannot.

Sony MDR-1000X supports “High Definition Audio” (96kHz / 24bit) when connected to a compatible standard LDAC devices by Sony, and wireless codecs, providing high-quality playback of music on Bluetooth – aptX for Android-devices, AAC for Apple gadgets. There have headphones and balanced “humanely”, the majority of users of their way of dealing with music being played will surely enjoy is at least, if “the monitor” detachment and coldness they prefer a colored, “warm” emotional and, at the same time not lose their natural sound.
If the bass is accentuated in the record (eg, in most R’n’B-Tracks) – you have them and hear, will not find it. But “invent” the low frequencies where they did not provide the authors write, the headphones are not collected. The users, who had to make other headphones dependence on hypertrophic low frequencies, the sound may seem insufficient slaughter. But I personally like this approach, which was chosen in the Sony.
Similarly, headphones handle vocals in most songs is do not stick out, but is transmitted clearly and reliably, while not denying emotion. Sounding in approximately the same range of tools do not merge with the voice, separated from it. “I See You” The XX sounds fantastic is sound engineers group traditionally carefully suited to the vocals while maintaining the smallest nuances, textures. With MDR-1000X there is a feeling as if not only hear the voices of singers but also feel they’re tactile. 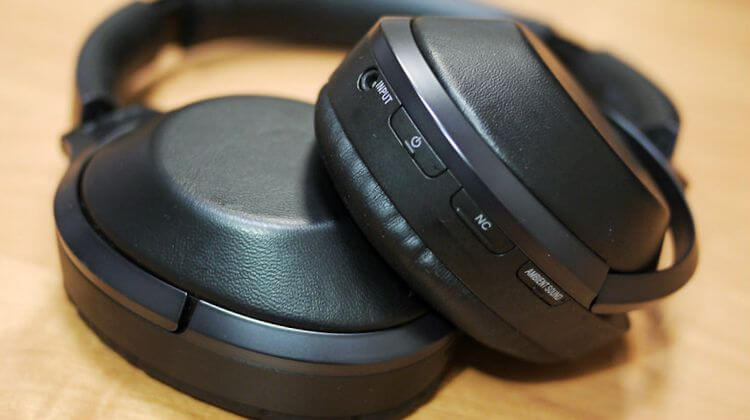 The Sony say that the headphones are equipped with technology DSEE HX – it “treats” victims of MP3-compression files, filling in the high-frequency region losses. It is difficult to judge how effective it is – it is good it is necessary to compare the headphones with the same model, but without the technology. But the typical “ringing” artifacts in compressed music (Apple Music, Google Play Music, SoundCloud) and the truth is not audible. I dare disturb the audiophile, but MDR-1000X sounds great even in compressed MP3 music from the symphonic services. Is that the flute and violin on a high bluff volume (that is, by the way, refers to the sound of the guitar solo or wind instruments).
Autonomy MDR-1000X excellent is said producer index in 20 hours is untrue, at least when listening volume by 40-50%. Louder I personally do most of the records were uncomfortable listen. Accordingly, the charging device does not instantly, about 4 hours (here would fast charging in a smartphone, right?).

Are the Sony MDR-1000X in Great Britain is not cheap, about $600. If you are lucky enough to be abroad in DutyFree with good electronics department, you can seriously save you: for example, at the airport in Singapore, this model was sold for the equivalent of $445. The price in the US is $ 400 without taxes. 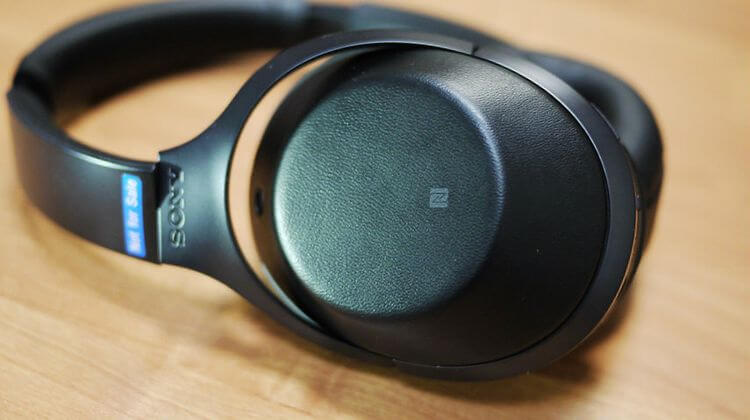 Major competitors are cheaper. Bose QC-35 for $480 have at least an effective noise-canceling, but it can not be disabled, even there in the cup “unorthodox” 2.5-mm jack, cable is better not to lose. And with Bose sound transmission engineers slightly went too far in relation to the bass – it somehow many, even where the authors write it explicitly did not include. Well, no high-definition audio, the Sony even has LDAC for use with compatible devices company.
Approximately in the same class have Samsung Level On Pro Wireless, also with active noise cancellation. A smartphone, Samsung, they probably really work best – for example, the device allows you to “share” music from your device with other owners of compatible headphones, supports proprietary standard audio achieving a high resolution. At the same time, the autonomy of this model with the included Noise exactly half that of the Sony models and the appliance is not the Samsung flagship, the headphones sound at what some banal Beats Solo.
From my point of view, Sony MDR-1000X is one of the most thought-out models of the Noise Canceling Headphones, corresponding to the majority of requests of potential buyers is here and wearing comfort, and compact when folded for easy transport and efficient noise reduction, and a nice in all respects sound. Personally, I have a question only to material housing is not whether the rustic looks black model with its solid price, not too much there is a $600 in the construction of plastic?