Mar 27, 2017
In the review, we are testing the new Acer Predator 17 gaming notebook. Equipped with the Nvidia GeForce GTX 1070 graphics card, the new high-end model will reach the German market this month. With it, everything the player’s heart desires. A fast SSD, Intel Core i7 quad-core processor, and a high-resolution 4K UHD display. Whether the 17 inches convinces, we clarify in our test report. 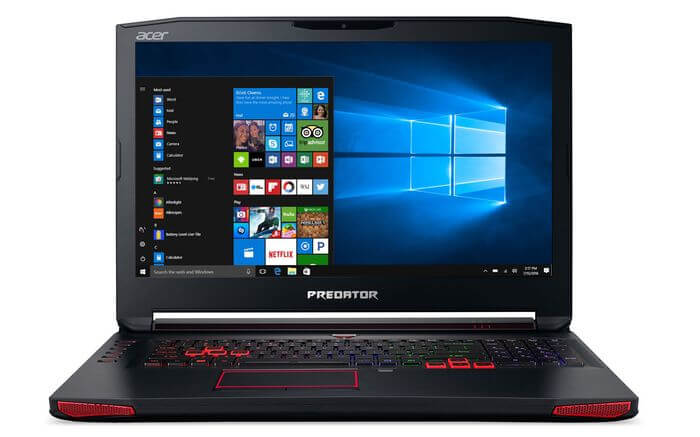 The new Acer Predator 17 notebook review comes under the product code G9-793. Compared to the predecessor G9-792 optically only marginal differences can be observed. Only the ventilation outlet positioned at the rear received a facelift. Thus, we meet again a stable metal housing, which is additionally equipped with a rubberized soft-touch surface. The pre-production status of our G9-793-70F3 configuration probably refers only to the installed components, as externally we meet a very well-processed Acer Predator 17. Of course, such a 17-inch gaming notebook is the main focus. The mobility with a weight of 4.2 kilograms and an overall height of just under 40 millimeters suffers to a certain extent. The input devices are equally convincing. The large-area keyboard, including macro keys and numeric keypad, is suitable for both multipliers and players. This is ensured by a good stroke, the crisp pressure point, and a pleasant feedback. The user is also free to adjust the color and activity of the four lighting zones according to his / her expectations. We can also positively comment on the touchpad, which can be deactivated at the push of a button and has been integrated into the classic layout including a separate matte button. Thus, the Acer Predator 17 G9-793 is not only interesting for mobile gamers, but also for users looking for a desktop replacement for working and multimedia every day.
The connections of the Acer Predator 17 specs are distributed over the left and right side of the housing. Two of the four Dolby audio speakers as well as the aforementioned ventilation outlets are placed on the front and rear. With four standard-sized USB 3.0 Type A interfaces, the 17 inch is well stocked. Added to this is a new USB 3.1 port with new Type C format and Thunderbolt 3 support. With this future-oriented standard, external docks, hubs and also screens can be controlled. Alternatively, you can also use the HDMI or DisplayPort outputs on the notebook to optimize your monitor setup at the desk. 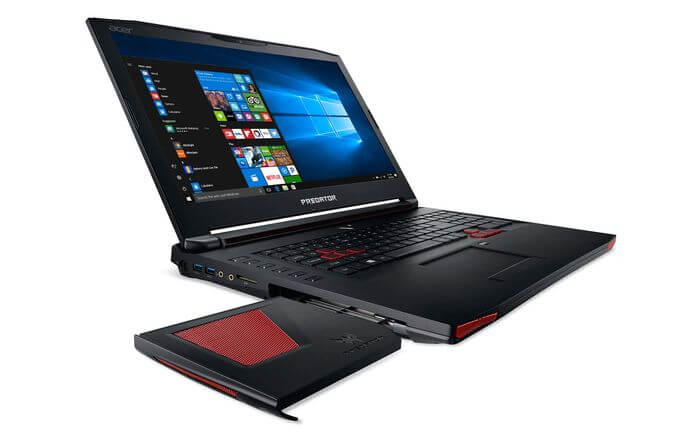 The port portfolio of Gigabit Ethernet (LAN), two audio ports and an SD card reader is rounded off. The appeal is via WLAN ac and Bluetooth 4.1. With the Killer DoubleShot Pro technology, you can also bundle wired and wireless network connections to enable higher data transfers. As is known from the Predator 17 series, Acer is also using the new model on a multibay bay. This allows you to replace the built-in DVD burner with a supplied fan unit to cool the chassis and components in hot battles. At Acer, this technique is known as FrostCore.
On the software side, the Acer Predator 17 G9-793 works with the Windows 10 Home operating system in the 64-bit version. There are also various configuration tools for hotkeys, fans, and network controllers. Namely Acer PredatorSense, DustDefender and Killer Network Manager.

Pascal does a good job 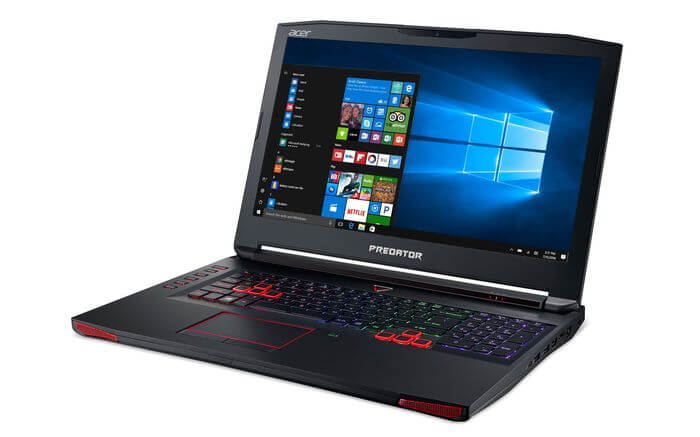 The new Acer Predator 17 G9-793-70F3 review can be yours for just under 3,000 Euros. You get an Intel Core i7-6700HQ processor, a 32 GB DDR4 memory, a 512 GB PCIe SSD and a 1,000 GB hard drive. The Quad-Core chip works with a maximum turbo frequency of 3.5 GHz and accommodates the Intel HD Graphics 530. Via Optimus technology, the Acer Gamer switches automatically and, if desired, manually to the new Nvidia GeForce GTX 1070. Pascal architecture, 16nm manufacturing process, 8GB of GDDR5 memory, 256-bit memory interface and a boost clock of up to 1,645MHz. While technology-savvy gamers are already rubbing their hands at this time, let’s talk about simple numbers for Otto Normalverbraucher.
The performance of the GTX 1070 is up to 150 percent higher than the predecessor GTX 970M in synthetic benchmarks like 3DMark and also in games like Overwatch, Battlefield 4, FIFA 16, Fallout 4 or Rainbow Six. Between 70 and 100 percent, added value are compared to the GTX 980M and 5 to 15 percent for the GTX 980 (without M). It can not be said otherwise, but in this area, Nvidia has made a terrific leap. For this, gaming fans have to reckon with the higher Nvidia GeForce GTX 10 series with higher device prices. The cheapest notebook with GTX 1070 is currently at a proud 1,799 euros. But the investment is worth it. 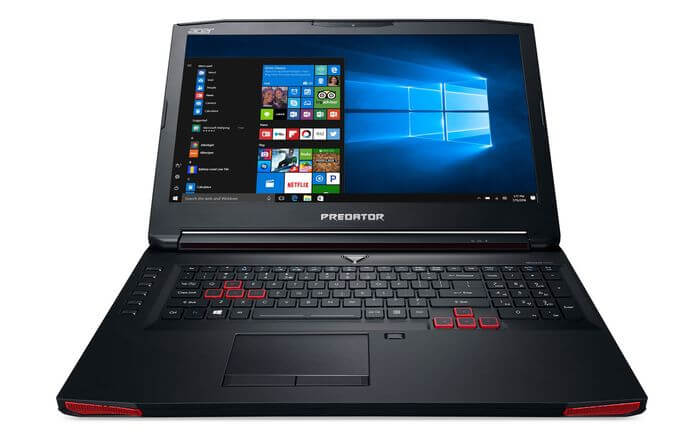 Better up to now only the higher positioned and more expensive Nvidia GeForce GTX 1080. Acer has so far only used this chip in the recently announced Predator 21 X Monster notebook. And this is twice as fast in the SLI network. This video shows you a small outlook on how seriously Acer takes the issue of gaming. If you want to get the notebook with a 21-inch Curved Monitor, however, has to wait until the beginning of 2017 and probably take almost twice as much money in hand as for the Predator 17.
The great advantage of a strong graphics performance like the Acer Predator 17 G9-793-70F3 features is its suitability for games in high 4K UHD resolution. The 17-inch game notebook from Acer comes in our configuration with a resolution of 3.840 x 2.160 pixels. Even if the Framerate in demanding games is only 35 FPS, playable would be. If you scale down to a classic 1080p resolution, the built-in GTX 1070 will not be able to get anywhere near now and thus always liquid gameplay enjoy. The matte surface of the 4K display and the solid illumination of 320 cd / m² on average also ensure the enjoyment. In addition, the angle-angle stable IPS technology, a good contrast of 1,300: 1 and a full coverage of the sRGB color space.

In the large 17 inch housing of the Acer Predator 17, the heat spreads well and can be dissipated comparatively easily. Although we measure hotspots at up to 42 degrees Celsius under high capacity, on average the temperatures remain in the hand warm range between 30-34 degrees. The high, maximum energy consumption of the total system of up to 225 watts can be covered by the 230-watt power supply. This, of course, results in correspondingly short battery recharge times, which can also hardly help the Nvidia Optimus technology as well as Intel’s chip graphics. When idling, we determine a maximum of 4.5 hours, with the full load only 1.5 hours. In practice, you can count on almost 3 hours. Buyers decide here clearly for the high performance and the mobility factor, which already ended with weight and dimension. With such a high performance, you also have to expect a higher volume of up to 44 dB (A) in gaming mode or up to 50 dB (A) at maximum fan speed. 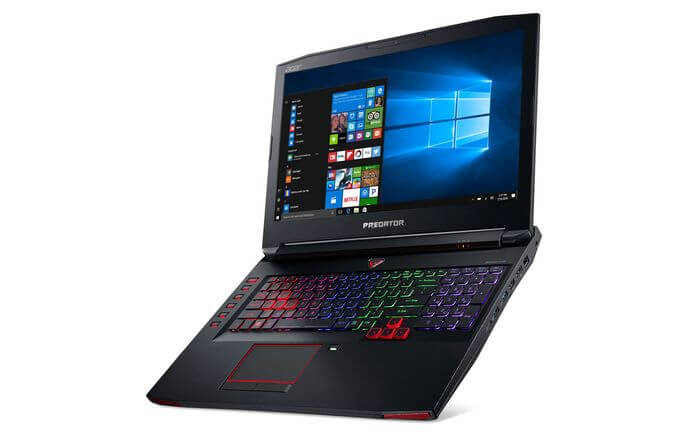 The DVD drive can be exchanged for a fan via the Multibay slot. The configuration provided to us is the Acer Predator G9-793-77LG in a pre-production version. Since this variant with 256 GB SSD is not expected to be released in Germany, we have created the test report based on the Acer Predator 17 G9-793-70F3. The only difference is the 512 GB twice the SSD. Deviations to the speed (about 2,000 MB / s for sequential reading and 840 MB / s for sequential writing) should occur only slightly. As soon as we have final test samples of the gaming notebooks, we will update the test report and inform you about any deviations.

If you are looking for a powerful and future-proof gaming notebook, the Acer Predator 17 with Nvidia GeForce GTX 1070 should take the narrow selection. A well-designed housing meets a wide range of equipment and good input devices. Above all, however, the built-in graphics card with Pascal architecture ensures top performance in benchmarks and games. For the first time, we can even talk about a liquid 4K gaming. Furthermore, the FrostCore fan, the DustDefender, and a powerful 4.1 audio system make Acer stand out from the competition.
Swabs must only be taken in terms of volume, weight, and battery life. The Acer Predator 17 G9-793 gaming notebook in this case rather approaches a mobile desktop system instead of an ultra mobile laptop. In addition, the high performance has its price. Nearly 3,000 euros have to be placed on the table for our configuration. No bargain, but one of the most powerful notebooks on the market.