Mar 24, 2017
Snapdragon 835 compared with previous Qualcomm processors, as well as with devices based on Kirin and Exynos. You can guess the results: we have a new leader. 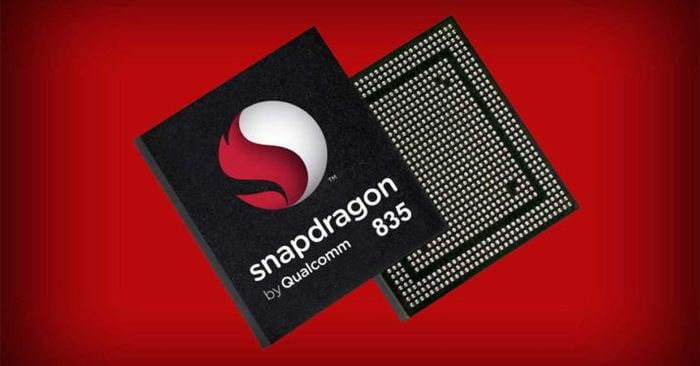 Snapdragon 835 is updated in the line of processors Qualcomm. This is the CPU you will see in every top-end smartphone in 2017.
The buyer often does not care how exactly it was possible to increase productivity and due to what the energy costs of the hardware part of the smartphone was reduced. Everyone is interested in benchmarks. This is one of the first comparisons of Snapdragon 835 in performance tests.
Snapdragon 835 is at least 20% faster and 25% more energy efficient than Snapdragon 820. The performance of the GPU has increased by 40%.

Geekbench 4 is a synthetic benchmark for testing CPU performance. Snapdragon 835 in it leads: in the multicore mode it gives 40% more result than Snapdragon 821. In the single-core mode, the result is also higher by 10% to the performance. 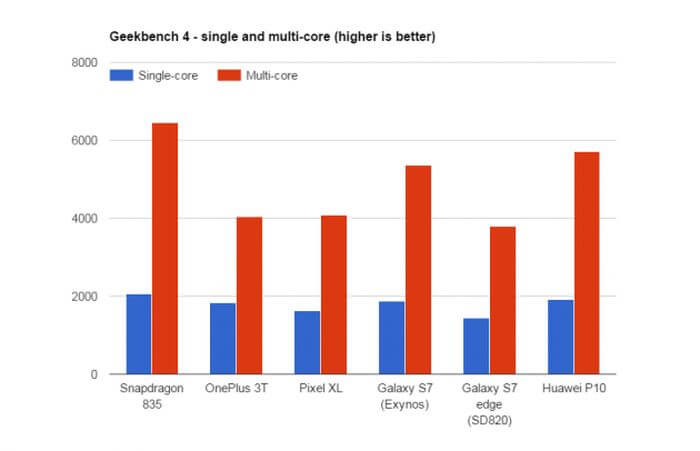 The test consists of several graphic benchmarks (Open GL ES 3.1, 3.0 and 2.0). On all smartphones, regardless of the characteristics of their screens, a picture of the same resolution was used. In the most complex test, Snapdragon 835 by 30% overtake Snapdragon 821, including thanks to the new graphics processor Adreno 540.
The GFXBench results are yet another proof that Qualcomm with graphics is doing better than Exynos or Kirin. 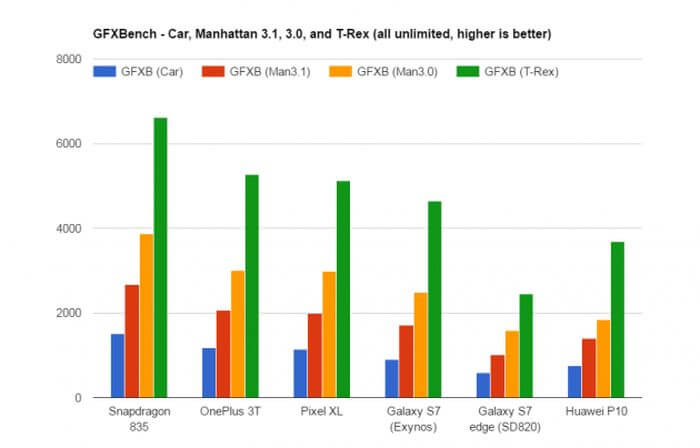 One of the most famous synthetic tests is demonstrating the speed of processing information from the built-in memory of devices, testing the RAM, the work of the GPU, CPU and other parameters. Snapdragon 835 in this test has more points than its competitors. But do not rely solely on this benchmark, choosing a smartphone for performance. 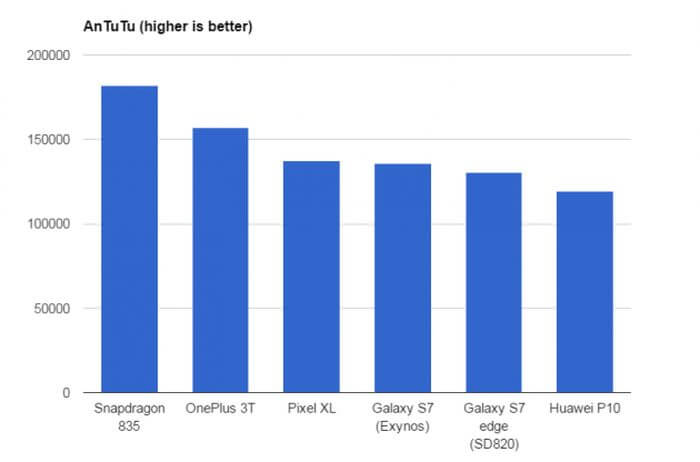 In 3DMark, desktop computers were initially tested. Over time, the test migrated to mobile platforms and now feels confident in a number of benchmarks for smartphones. 3DMark checks what the graphics system is capable of. Filling on a chip Qualcomm Snapdragon 835 is almost 50% better to handle data processing than competing devices. 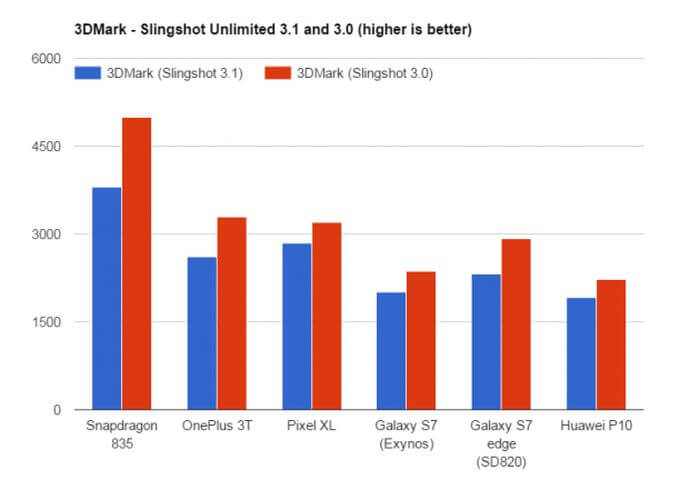 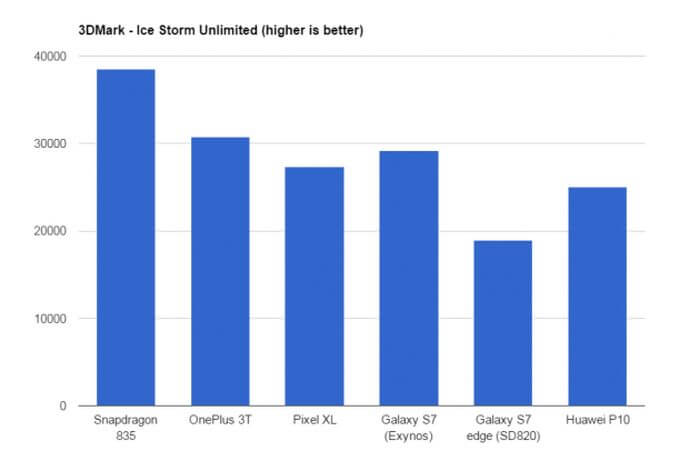 This benchmark tests the hardware for performing typical loads. OnePlus 3T could not be tested (most likely, because the test was not performed on the latest version of PCMark). 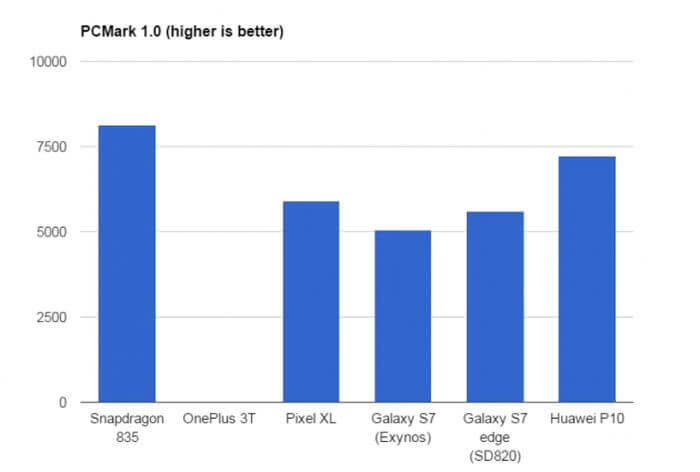 Tests demonstrating are the performance of JavaScript. At Snapdragon 835 there’s a solid break: for example, in Octane, 40% of Exynos. 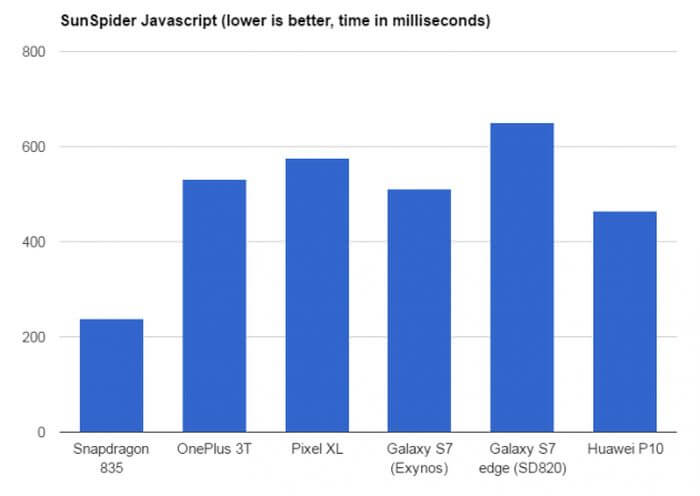 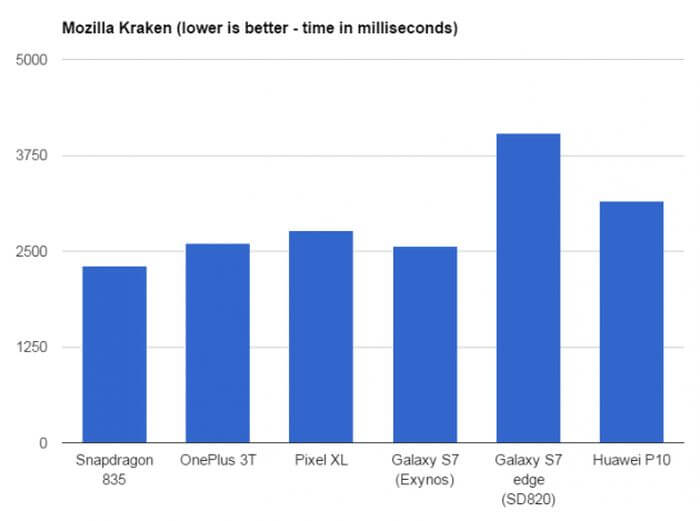 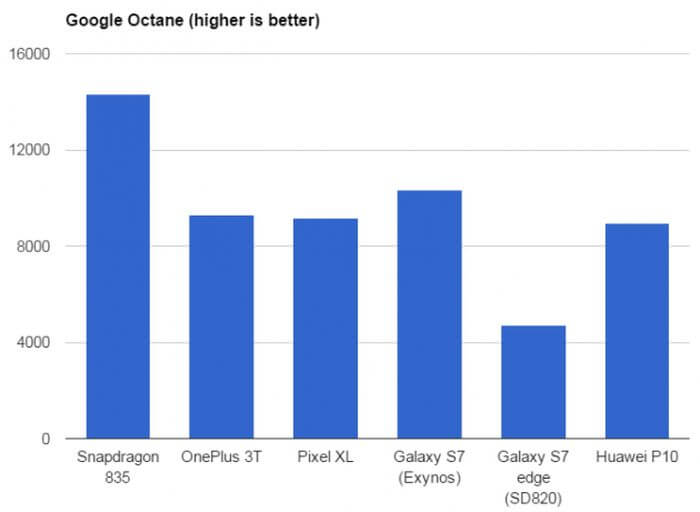 Recall, the first smartphone on sale, equipped with Snapdragon 835 will be Samsung Galaxy S8. His presentation will take place on March 29. The novelty will be on the market within a month.
Due to the fact that Qualcomm is busy with the release of processors for the Galaxy S8, other large companies could not equip their new flagships with the same processor. Therefore, other smartphones with the new Snapdragon 835 processor are unlikely to appear before the summer.