Mar 26, 2017
Today we will try to find the answer to the question, which smartphone is better: the new LG G6 vs LG G5 already tested by the last year’s flagship of the Korean company. At the moment, the second is from $415. In Europe, and the first is not yet sold at all, and the expected price is almost twice as high. 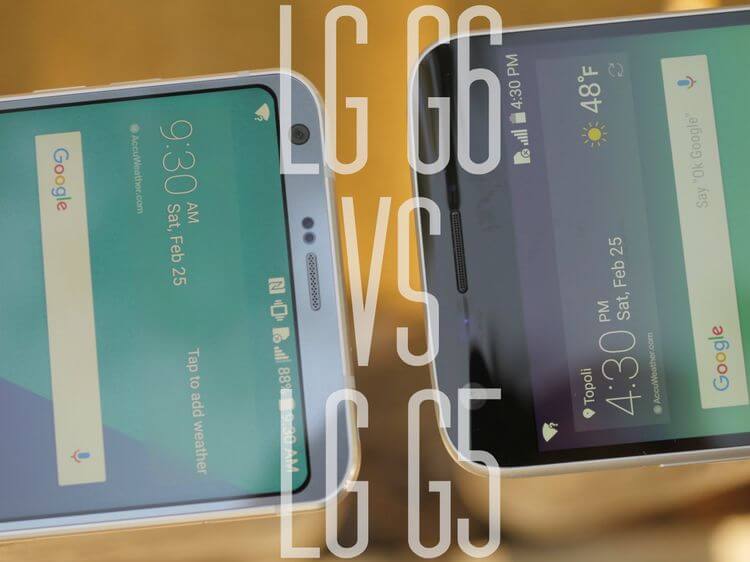 At the same time, LG G6 and G5 have almost the same hardware base: the flagship of 2016 is based on Qualcomm Snapdragon 820 and has 4 GB of RAM, the new “six” is based on a slightly faster Snapdragon 821 and has a similar amount of RAM.
The main differences between the LG G6 and last year’s LG G5

Of course, in terms of the screen, the new LG G6 looks much more interesting than the LG G5: a large 5.7-inch ultra-wide FullView matrix with a resolution of QHD + (2880 × 1440 pixels) versus the usual QHD (2560 × 1440 pixels) and 5.3 inches. The difference is noticeable to the naked eye.
At the same time, the dimensions of the smartphone practically did not change: 148.9 x 71.9 x 7.9 mm against the previous 149.4 x 73.9 x 7.7 mm.
Disclaimer of LG Friends extension modules
The main feature of last year’s LG G5 was the possibility of connecting special Friends plug-in modules, among which was a larger capacity battery, an external sound card, an additional camera, etc. Unfortunately, “the masses” the idea did not go.
In general, out of all this “economy”, it was useful only a removable battery (a rarity is not only among the flagships but also smartphones of the middle price range in our time).

The current LG G6 is equipped with a dual main camera 13 MP + 13 MP, consisting of two modules with different characteristics:
For comparison, the main LG G5 camera had a configuration of 16 MP + 8 MP:
In both cases there is an imitation of optical zoom due to the use of different optics, a similar principle is used in the Apple iPhone 7 Plus.
In general, the tests show the best camera quality of the LG G6 compared to the LG G5, but the advantage is not overwhelming. A significant disadvantage is the lack of autofocus and image stabilization on a wide angle.
And the front camera LG G5 is better than the new G6: 8 Mp resolution and aperture f / 2.0 against the new 5 Mp and f / 2.2.

The new LG G6 has a fairly good battery capacity of 3300 mAh, while the former flagship G5 – only 2800 mAh. Yes, now the smartphone battery is not removable, but in recent years, few people use it as an immediate replacement, if there is such an opportunity.
Protection against water and dust
The new “six” has protection against water and dust in accordance with the international standard IP68. This became possible due to the rejection of the modular design. The option is uniquely useful in everyday life.

LG G6 has the ability to wirelessly charge according to WPC and PMA standards. Unfortunately, it is available only for modifications sold in the US. Because of the binding to the mobile operator, they are usually not suitable for operation in other networks without an unlock.
Also in the range of the new flagship, there was a version with 64 GB of internal memory. However, it is officially sold only in South Korea, for this reason, this advantage is not valid for other markets including Russia.

“Here and now” is quite possible to take last year’s LG G5. It has long been sold on the market, received updates to the “nougat” and on most parameters is not inferior to the top-notch novelty of the company.
However, if you really want a modern and innovative smartphone, it definitely makes sense to wait for the LG G6. And even wait for a little, so that he will reduce in price.