Mar 27, 2017
With the MateBook, Huawei is celebrating its 2-in-1 test premiere among the Windows 10 tablets. Equipped with a fanless Intel Core M processor, 12-inch display and matching business accessories, the Chinese company wants to appeal to design-oriented managers in particular. 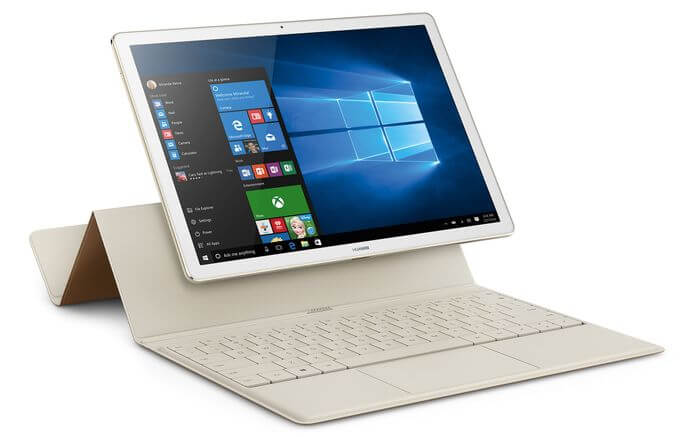 But the competition is great. Led by the Microsoft Surface workforce. See the Huawei MateBook in the review.

After an intervention from Intel and Microsoft at well-known manufacturers, there are so-called 2-in-1 products currently like sand at sea. 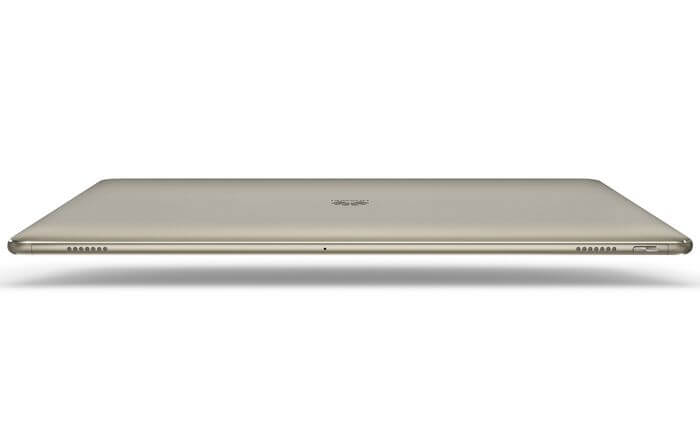 The combination of tablet and notebook should save the grip on the third device, which would be used in addition to the own laptop and smartphone. Virtually every company offers the hybrids. HP has its x2 series, Lenovo belongs with yoga and Miix to the pioneers and also Acer is with the switch series with of the lot. Better late than never though Huawei. 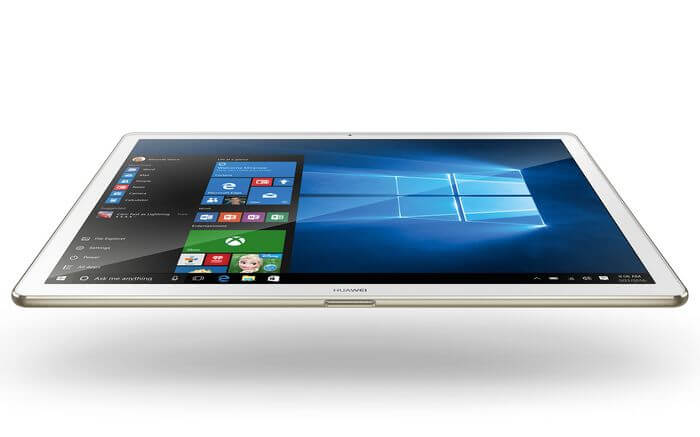 The Chinese company is currently launching the MateBook at the start and will therefore mainly attack Microsoft’s Surface Pro 4 and the Surfacebook models.

For the test, we not only receive the tablet unit of the Huawei MateBook, but also the MatePen, the portfolio keyboard, and the MateDock. The luxury package is sold for around 1,200 euros in almost all online shops. Pen and dock must be purchased separately. The business package of Huawei is, therefore, comparable to the Surface Pro 4. 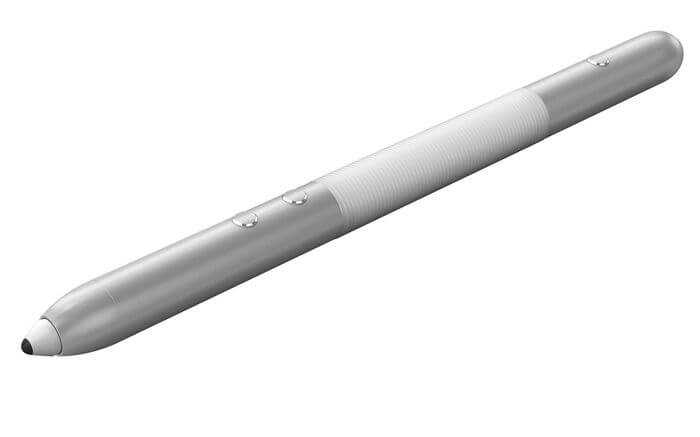 However, Huawei is more oriented on the portfolio from Cupertino. Similar to other manufacturers, the MateBook strongly resembles an Apple iPad Pro. In any case, we like the simple appearance of the aluminum housing as well as its very good stability and processing. The supplied accessories are also very good. Optically and haptically a real treat.

The Windows 10 Tablet brings nearly 640 grams on the scales. Including keyboard dock, we are at just over one kilogram. Above all, it’s the low 6.9-millimeter height to convince white. Currently, the Huawei MateBook is even the thinnest Windows 10 2-in-1. High quality, stable, slim and lightweight! The outer properties are convincing. But what does about the equipment? The 12-inch tablet employs a single USB Type-C connector, a proprietary port for docking the keyboard, and the classic audio interface for headphones or headsets. The appeal is via WLAN ac and Bluetooth 4.1. The Apple MacBook 12 also appears spartan. Is there a competition here? If you add the MateDock to the MateBook, you can expand the ports by two standard USB 3.0 ports, an additional Type-C, HDMI, VGA and Ethernet (Gigabit LAN). 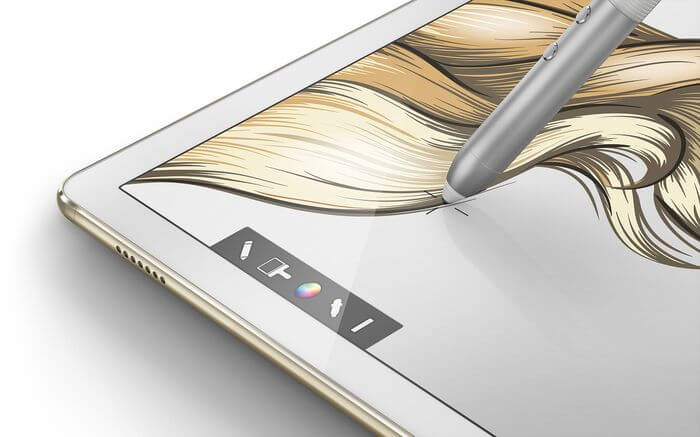 Mixed feelings can be seen in the input devices. The MatePen enables 2,000 print stages, has a laser pointer and can be charged via a micro USB adapter. He works precisely and allows good handwriting and design work. The keyboard dock relies on a so-called floating keyboard similar to what we found in Acer’s Aspire notebooks many years ago. There are therefore no gaps between the keys, which at the beginning does not minimize minimization. A certain adaptation period is, therefore, necessary. However, our fingers did not want to get used to the surface after several weeks. At the same time, the keys offer a comparatively good pressure point and decent feedback. In addition, the keyboard can be illuminated in three steps. However, the taste is also different for keyboards. Who plays with the purchase, though, should try the Huawei MateBook before in the store business.

Let’s look at the technical features of the Huawei MateBook. The business version of the 2-in-1 is based on an Intel Core m5-6Y57 processor with 2.8 GHz. The more favorable elite variant, on the other hand, is based on a Core m3 counterpart. No matter how we turn it and turn, the performance of these types of processors is manageable but good.
The performance is perfect for everyday use with emails, documents, the Internet, films, music and more. However, the focus is more on consuming multimedia content instead of producing. If you want more, you have to look for a device with Intel Core i5 or Core i7 chip.
The same is true from a graphical point of view because the MateBook is based on the integrated Intel HD Graphics 515. The 8 GB RAM and the 256 GB SSD is well-dimensioned. In the smaller variant for less than 900 euros, however, you only have 4 GB of RAM and 128 GB of memory. The read and write rates of the built-in SSD can, however, be seen. We measure up to 520 MB / s in our tests.

The built-in 12-inch display shows thanks to IPS technology good viewing angle stability and the resolution of 2.160 x 1.440 pixels (216 ppi) white to please. Added to this are a good brightness of 430 cd / m² on average and an above-average contrast of 1,200: 1. However, color space enthusiasts should calibrate the display to remove the subtle blue noise. Then there is a good sRGB color space cover. Bottom line, we are quite satisfied with the screen of the Huawei MateBook. 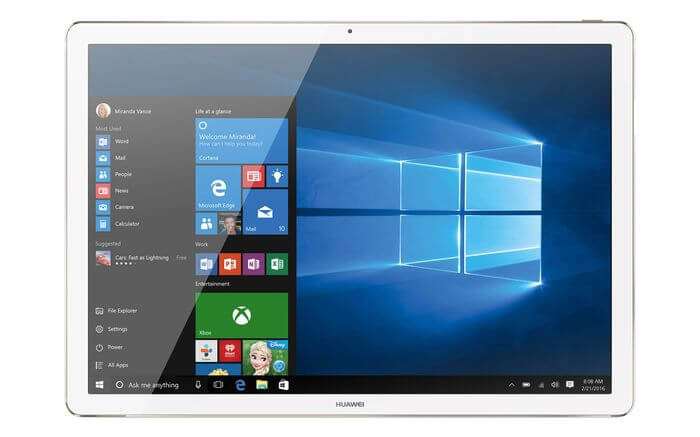 There is also good news about the emissions. Despite the fanless construction, our test device is only handed warm in practice. It is only when the load is strong that peaks of more than 40 degrees Celsius are reached. As expected, the Intel Core M5 processor throttles from a certain load down automatically. Good for heat development, bad for lasting performance. A 4K film you will probably not want to render on the MateBook for hours. However, in normal consumption of media, these performance reductions are not noticeable. 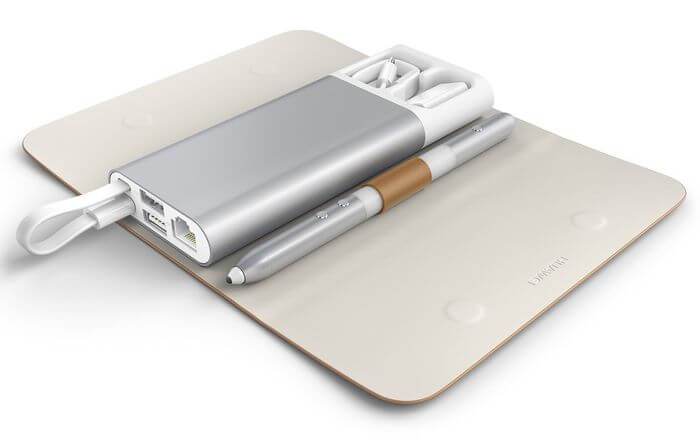 Disillusion, however, occurs when we take a closer look at the accumulation times. In our comparatively simple everyday life, which is largely confined to office work and surfing the Internet in most cases after 4 hours the air out. When idling, without radio connections and with dimmed brightness, a maximum of 8 hours is reached. At full load is even after 1.5 hours. Likewise, the complete charging takes over 4 hours too long.

Flat, light, high-quality and functional! With these terms, the new Huawei MateBook is best described. Above all the luminous and contrast strong 12 inch display could convince us in the test. The performance of the built-in Intel Core m5 processor surpasses the well-known Android and iOS tablets without problems but reaches its limits in productive everyday life as quickly. Consuming instead of producing is the motto here. We are disappointed by the comparatively meager battery life of the MateBook. Huawei surprised us with a nice accessory package. The stylish gadgets are aimed not only technically but also visually to the modern manager of today. However, the MateDock and the MatePen have to be bought in addition to the almost € 1,200-expensive business package.
It would probably rather the more favorable MateBook grab, which beats with less than 900 euros to Buche and for that no performance and storage space. If you expect notebook or desktop power in a small tablet, you also have to look elsewhere. Here, 2-in-1 models with Intel Core i5 or Core i7 processor would be more advantageous. However, anyone who wants to access the MateBook in order to cope with his daily office life (emails, documents, the Internet) can access this.