Mar 18, 2017
In noise canceling, Bose makes no difference: the Bluetooth headsets QuietComfort 35 show their impressive filter qualities in the test. It is the first closed Bose headphones with Bluetooth connection. Compared to the corded QC25, they also gain significantly more comfort and sound. 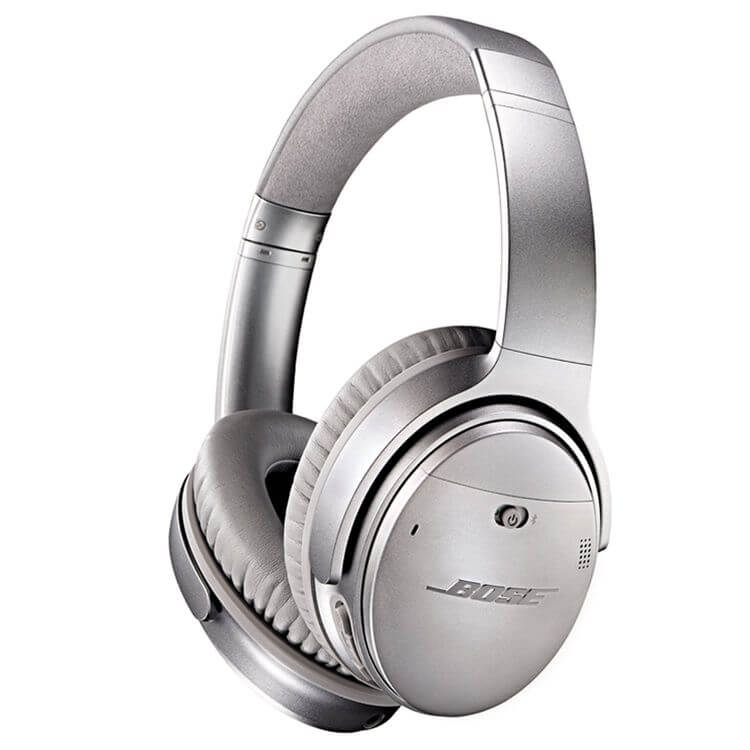 We are big fans of headphones with Active Noise Canceling (ANC). The Bose QC25, for example, is much sought after in the editorship because of its calming properties. Even without playing music, he helps in concentrating. Just switch the switch on the side and it will be around a wonderful quiet.
This can also be the wireless successor QuietComfort (QC) 35, whose suggested retail price is 379 euros. Online you can buy the ANC headphones from just 320 euros. Anyone who already knows or owns the QC25 and is now considering buying the successor model will find the most important differences between the two Bose headphones.

Bose QC35 vs Bose QC25: These are the differences (values for QC 25 in brackets)

Subjectively, we can not see any difference between the ANC technology in QC25 and QC35. The QC25 we already voted for the absolute ANC-king. It must now share this top spot with the QC35.
On the one hand, this is not a disadvantage, as we are still impressed by the Bose-ANC. On the other hand, we would have liked to see a clearly noticeable difference in this very important point for many buyers. For example, other manufacturers such as Libratone and Bose have long been able to offer a noise-canceling solution, which allows you to decide how many environmental sounds you can get. The test device does not want to know about this. Who would like to operate the QC35 in the Bluetooth operation without active noise suppression is a problem. By pressing the sliding switch on the side, you not only switch on the headphones but also activate the ANC at the same time. Since the ANC has the influence on the sound remains as an alternative only the cable-bound operation. The latter is fortunately also useable if the internal battery after a playing time of about twenty hours (manufacturer indication) after a charge calls.
If you have never had a Bose headphone with ANC on your head, you will be interested in these disadvantages only marginally, because as I said the filtering works very effectively. As before, it is mainly unchanging frequencies such as the noise of aircraft turbines or the noise in the train, which QuietComfort eliminates by reverberation. For this purpose, he uses microphones distributed on the housing. Voices remain perceptible, albeit somewhat muted. The ground noise with active ANC moves in very narrow paths and is tolerable in everyday life.

Compared to the QC25 we have tested, the new edition is more subtle, darker and dull. The distorted decorative ring is missing and the cladding of the pinna is in our case now black instead of gray. The well-functioning folding mechanism remained. Within seconds, the Bose headphones are collapsed and stowed in the transport case. The latter is just as much as an aircraft adapter and a 3.5-millimeter cable.
Despite the high entry price, the QuietComfort 35 does not exude any luxury flair. The materials used and their processing is good but not outstanding. The robust design is expected to ensure a long service life. The Bose headphones can also be accidentally placed on the headphones without a subsequent workshop visit.

The QC35 does not take you into the headbox – we would have preferred a more breathable ear pad. Anyone who regularly jumps to the S-Bahn in the morning will be happy about the possibility, in principle, of changing the ear pads. 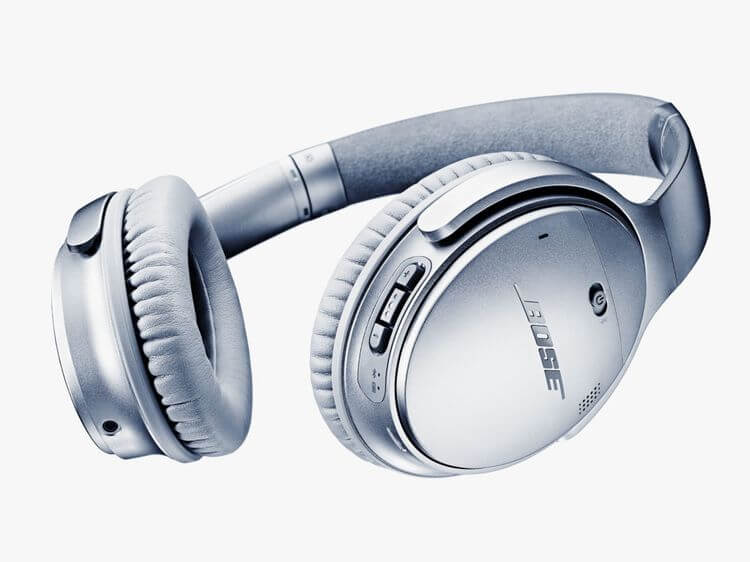 On the head, the test device is extremely comfortable, even for hours. The remastered bracket allows the size to be adjusted for both small and large heads and mounts. The pressure on the ears is, quite according to the product name, very “comfort”. No criticism at this point.

Coupling and operation via app

Now new: With Bluetooth smartphones, the Bluetooth headset thanks to NFC is very fast and stress-free. But also the connection with an iPhone does not present us insoluble problems. The Bluetooth headset acknowledges the coupling process with a very artificial voice, including a slight speech error, which has enough of the voice in the head to deactivate it in the settings.
On the right auricle, you will find three buttons for track selection and volume control. Thanks to a recess, the pushers can be felt very well. A short press on the middle button pauses the music, a longer pressure calls Siri and/or Google Now on the plan. You can also jump to the title by pressing one of the other two buttons briefly one after the other.
Bose gives the QC35 its own app. The free software available in the Play Store or App Store, called Bose Connect, gives you access to some settings. For example, you can specify the time at which the headphones automatically switch off. If your friend or friend also has Bluetooth headsets, the music can be streamed from a smartphone to two headset pairs.

To the predecessor, we attested a rather moderate sound picture with missing width and over-emphasized bass. Here the QC35 makes much better. We can see a similar quantum leap in the sound quality as when cutting the cable from the B & W P7 (Wireless).
The QC35 sounds much warmer, more balanced and freer than the direct predecessor, but still, has a few distinct weaknesses. And these mainly affect the low frequencies. In our opinion, the review excerpt deals with the theme of bass too engaged.
The mids and highs are much more pronounced, yes, the overall joy of playing. We do not lean far out of the window when we attest to the QC35 a massaging sound. However true music friends, who place less emphasis on the ANC as well as good sound, find in the 400 euro class better (Bluetooth) headphones. Quite apart from this price class. 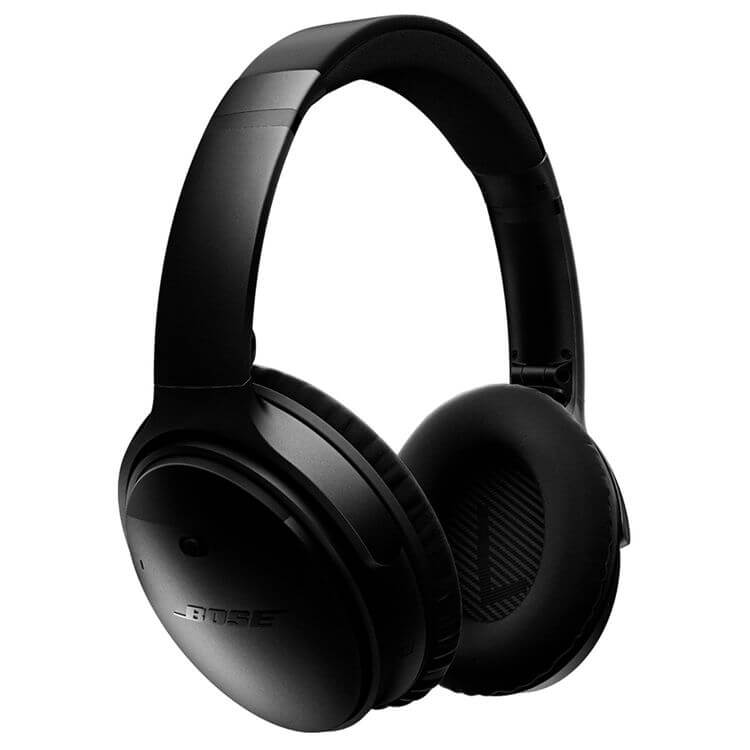 If you want to spend less, but still the highest value on the noise filtering should look at the still available Bose QuietComfort 25. As sound balanced and better processed we felt the Sony MDR-1000X, which can not compete with the ANC however. The Bowers & Wilkins P7 Wireless or Sennheiser Momentum Wireless is a good companion for those who want to focus on good sound, invest around 400 euros and can completely dispense with ANC.

The Bose QuietComfort is the perfect travel headphone thanks to its effective ANC system. In this discipline, the manufacturer makes no effort at all. It also makes a lot of fun when listening to music, especially when compared to the still available QC25. Who can do without the ANC but finds in the same price class both cable-bound and Bluetooth headphones, which in our opinion sound better.