Mar 25, 2017
Samsung fans are looking forward to the presentation of the Galaxy S8 at the end of the month. However, on the Internet, the first picture of another Samsung smartphone is causing a sensation. On the platform “Leaks” a schematic drawing of the Galaxy Note 8 appeared. It indicates that the note 8 will have a foldable display. 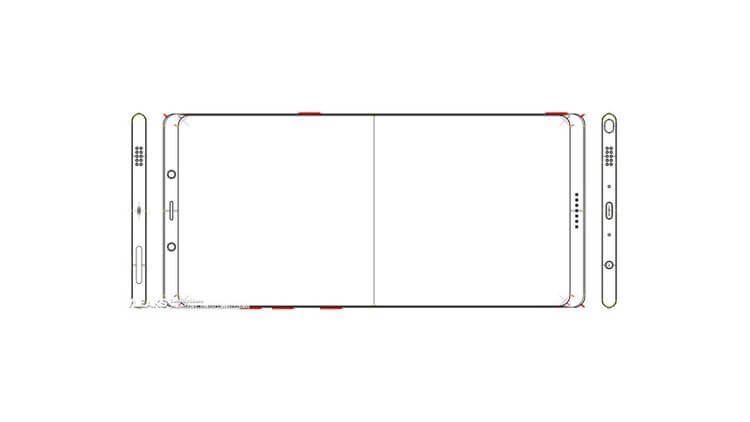 Do we see the Galaxy Note 8? The user “IAMMULZIBANU” has uploaded the schematic drawing of a smartphone on the platform “Leaks”, according to his data it is a sketch of the Galaxy Note 8. Striking: In the middle of the display runs a vertical line. What’s it all about?
The rumored kitchen leaves only an interpretation: The Galaxy Note 8 will provide a foldable display. Corresponding screens have been at Samsung for year’s already in development and also the integration of these in smartphones is worked intensively. Various patents indicate this. In May 2016, for example, the Blog Patently Mobile discovered a corresponding patent that shows a foldable smartphone. The images in the patent application have a striking similarity to the presumed note 8 sketches.

Is a new set-up feature for the note series?

A foldable screen in Galaxy Note 8 would be a sensation! Until now, the industry assumed that Samsung is testing a corresponding screen in another model. The device was baptized from the net to the name Galaxy X. However, use in Note 8 would make sense. Since the display of the Galaxy S8 is significantly larger, the note series loses more and more its unique feature. With a foldable screen, Samsung could pick the Phablet again more clearly from the S-series.
But is the sketch of note 8 genuine? This is hard to say because we cannot trace the original source back. In the past, on the platform “Leaks”, however, correct preliminary information was often found. But the community classifies the Note 8-Leak as a little trustworthy. Only 45 percent of users trust him. Probably IAMMULZIBANU has just registered on the website.

Galaxy S8: Everything worth knowing about the S7 successor

At least the technical data he posts to the sketch sound not unrealistic. According to him, the note 8 should have a 6.4-inch display with QHD or 4K resolution as well as six gigabytes of memory. What do you think of this note 8-Leak?