The review will talk about Acer Spin 5 UK (Acer Spin SP513-51-79M8). It has support for working with Active Pen stylus. This compact laptop can be used both at home and when traveling, because this manufacturer has equipped it accordingly. 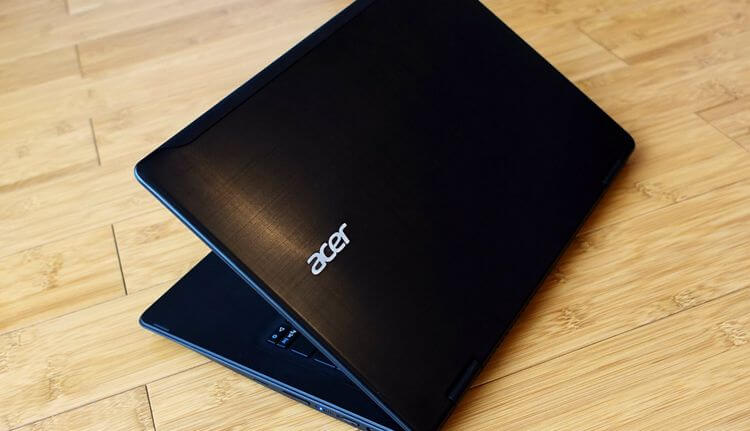 Many people are probably familiar with laptops Acer Aspire family and not one or two years, and much more. It is known that among ordinary devices you can see and transformable devices, for example, model Aspire R7 or R13. However, with the advent of Spin range, the manufacturer has made it clear to users that it is ready to expand in terms of gadgets 2-in-1.

The laptop meets pleasant discreet design. Acer Spin 5 is completely matt designed in the classic colors of black, complemented by cute patterned textiles. Moreover, such structure is found not only on the cover, and bottom. It draws attention to the working area, even though it is his ascetic. Incidentally, in the interior of the notebook is all traditionally edged display frames on which the webcam lens is provided. There is also an island keyboard, touchpad. 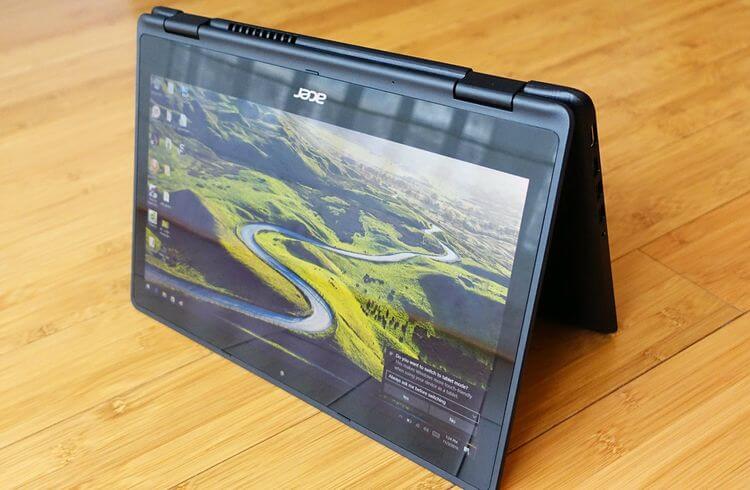 As for the bottom of the notebook, it is solid. On it you can see the ventilation grille, as well as two speaker sound systems. Also on the bottom there are two elongated rubber feet. They do not fully ensure a good grip, so Acer Spin 5 may slightly slip on a smooth flat surface. Perhaps the trouble will cause the upgrade, because the path to the inner set will lie through loosening of at least ten screws.

It is worth noting that all of the chassis matte, they are much more practical than a gloss. Remaining on laptop surfaces fingerprints, quickly removed the usual cloth. If we talk about build quality, it is quite satisfactory. All items are docked as expected. There are no gaps and irregularities. The plastic device is not less durable than the thin aluminum cover in the area. The latter are unable to withstand the pressure. 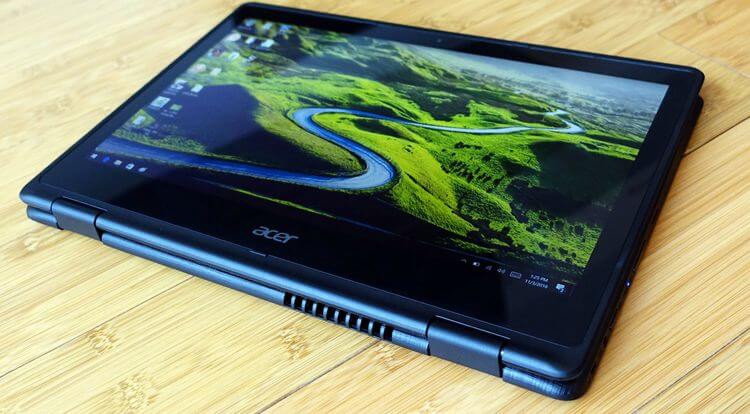 The hinges sturdy, firmly hold the display, but also make it possible to reveal the laptop with one hand. By the way, thanks to the strong hinges and the ability of the display to open up to 360 degrees. The transition from notebook to tablet mode has carried out without problems.

Acer Spin SP513-51 is quite compact. It dimensions has 328.8×228.5×19.7mm equally comfortable for travel and office use. The weight has 1.6 kg, it generally optimal to carry your laptop everywhere. Only in tablet mode it is too heavy, even for a long time not to hold with one hand.

The transformers Spin 5 set quality IPS-matrix with wide viewing angles. The display has a 13.3-inch diagonal and a touch surface, properly responsive to touch and supports Active Pen. Also, it worth noting is that the screen resolution of 1920×1080 pixels is favorable for business and pleasure.

We also note that the laptop screen is glossy, it looks juicy colors. However, compliance with the sRGB color space does not exceed 65%, and the brightness is quite low, its average is 187 cd / m2. Thus, when operating outside the picture will be a little dull, to him often have to look closely. Of course, to be used for professional purposes such display does not fit, but for everyday office tasks, view videos, photos, of course. 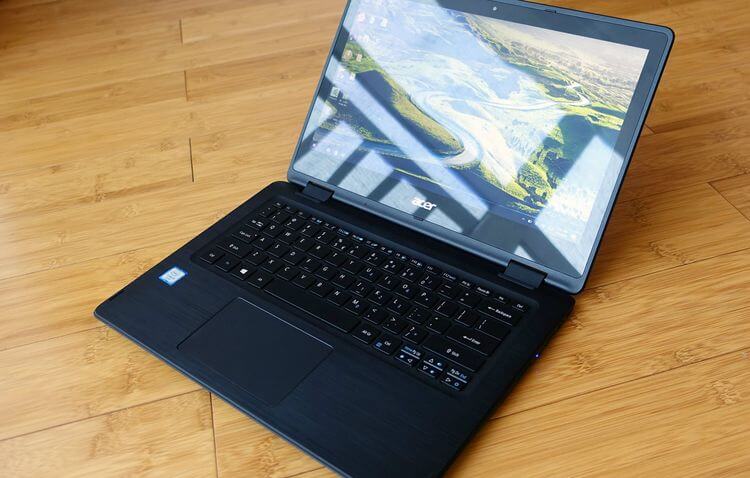 VGA webcam in the laptop has a low resolution, which is enough except on the normal communication in a Skype, but not for shooting high-quality photos. In low light indoor shots are grainy.

Speaker sound device is clearly, in general, on an average level. The volume is enough, but the closer it is to the maximum mark, the greater the distortion, it is unlikely that anyone will enjoy. Thus, even with the support of Acer TrueHarmony technology, providing some depth, better listen to audio through connected headphones.

A manufacturer of the island in the laptop keyboard in this case is somewhat recessed relative to the work surface. Its convenience is quite subjective, as in daily operation you will have to deal with short-stroke keys. However, if you are not the cause of the discomfort, the other factors that reduce the speed of printing, you do not run.

In particular, most of the mid-size keys (except – “arrows” and proximity to the [PgUp], [PgDn], [Home], [End]), the marking will not have to look closely. And with the standard layout is not necessary to readjust. 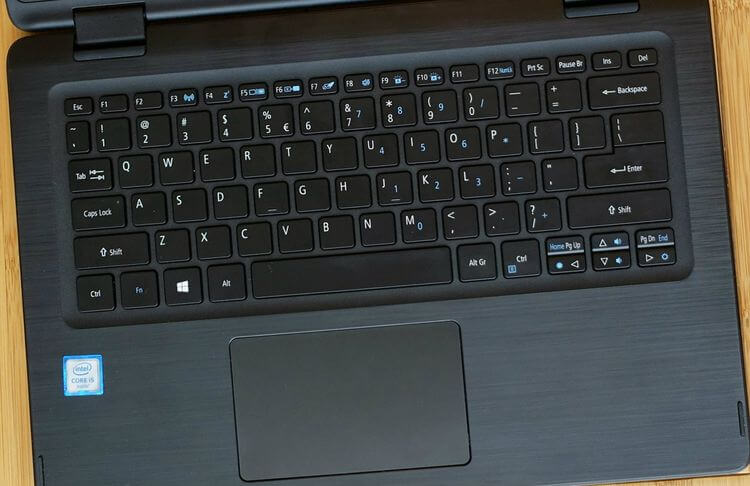 It is necessary to add a great resistance when pressed and, in general, quiet operation. A feature of this keyboard is the backlighting. It is a two-level, but has a minus sign, such as a faint glow.

It should be noted that Turbo Boost technology support allows the processor to run at up to 3.5 GHz. As for architecture, the Core i7-7500U is representative at the moment of the last generation Kaby Lake. In general, with such a CPU can be expected many modern objectives. 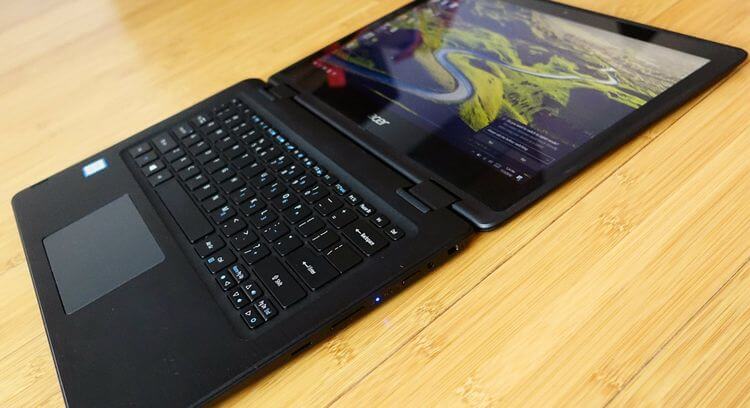 Intel HD Graphics 620 is an integrated video card, working in conjunction with the processor. Its potential is enough for graphical computing is not too high, so you can rely on Office applications, as well as media content.

Integrated Accelerator supports DirectX 12 and its frequency in the range 300-1050 MHz. If you want to Acer Spin SP513-51 serious play, the 24 unified streams is unlikely to render effective assistance. However, you can run at medium settings Farming Simulator 17 or Overwatch at 60 or 34 fps, respectively.

However, the display resolution will have to be reduced to 1366×768 pixels. Unfortunately, the modern games that you can play with Intel HD 620, not so much. Mafia 3, Ashes of the Singularity and the like it will not go even on low.

Laptop Package includes 8 GB of RAM DDR4 standard. This is by far the most optimum volume, which is enough for all sorts of applications, as well as a smooth and fast operation. With 8 GB of system will not slow down, and to execute immediately. What to speak, if the user wants to put 16 GB of RAM, because it is such a maximum is expected in this case.

By the way, established in Spin 5 solid state drive capacity of 256 GB is an excellent addition to the above stuffing. Let it not too much storage for files, but do not have to doubt its fast and stable operation.

Almost all the notebook ports have located on the left side of the housing. It can be seen three USB, one of which is 3.0 standard, and the pair is 2.0. In addition, the combined audio jack is provided on the left and a digital HDMI interface. 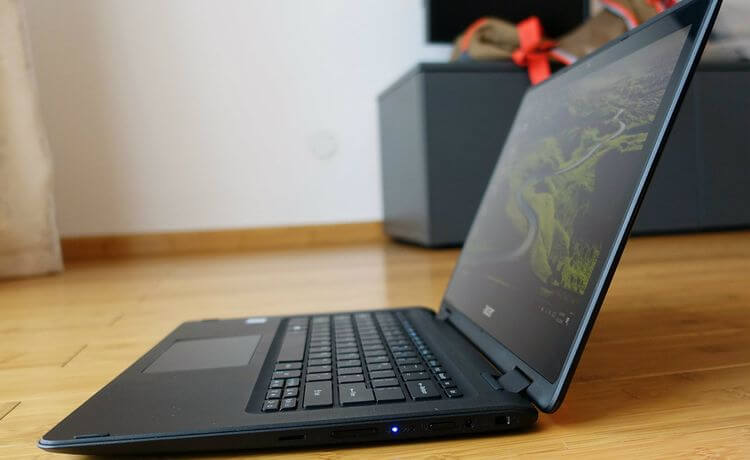 The right side holds a card reader (micro SD / micro SDHC / micro SDXC), Kensington lock slot, and socket for recharging. Apart from these there is a button on the device, volume button and some LEDs. Of course, I would like to see an RJ-45 and more modern USB Type-C, but they are absent in the laptop. 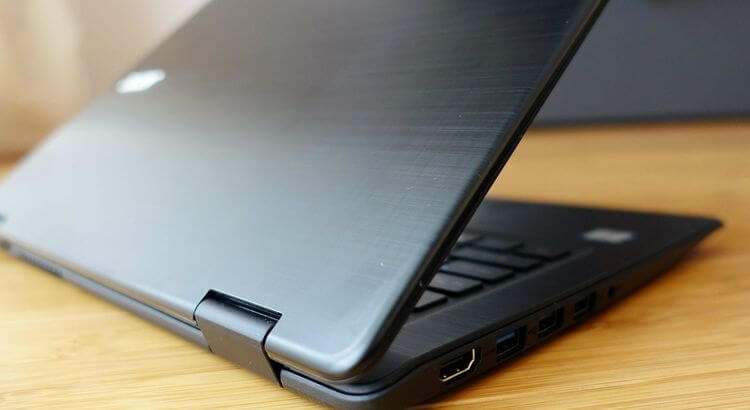 As for the front side and the rear panel, on which is no connectors.

There are 4-segment lithium-ion battery capacities of 3220mAh. It is able to ensure the autonomy of the average about 7-8 hours. In particular, when reducing the display brightness by 40% and enable Wi-Fi, it is possible to watch streaming video about 8 hours.

In parallel operation with lyrics duration will decrease by an hour. Finally, a good load discharges the transformer within 3 hours, which is pretty good. By the way, charging the battery 45-watt power supply will take two and a half hours.

Everything would be just fine, if not for the price tag, which is $ 1,200. Of course, the model turned out today, there are productive components. There is a very convenient input device, and touch Full HD-display, supporting Acer Active Pen stylus.

In addition, Acer Spin SP513-51-79M8 can run for a long time without recharging. At the same time, the cost of such a future owner probably expect to see a good level of brightness of the screen may have a discrete graphics card, USB port more modern standard.

So, with all the above advantages and disadvantages of your personal opinion on the purchase will be decisive.